In Star Wars does the Rule of Two make it difficult to come up with original stories? 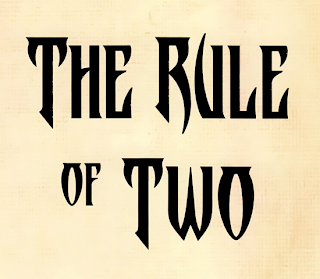 In the Star Wars universe, does the Rule of Two make it difficult to come up with original stories? So that you can consider this question with the proper nerd cred, the "Rule of Two" denotes that there can only be one Sith Master and their apprentice. In the Clone Wars cartoon series, Count Dooku was Sidious' apprentice. But there was a need for another "Sith-type" so that they could harass the heroes in plots outside the six Lucasfilm movies. This "Sith-type" needed to be able to withstand the powers of the Jedi, not be easily vanquished (unlike droids), and able to be killed off if necessary (and not affect the movies). Oh yeah, and they can't be full-fledged "Sith" because the Rule of Two constrains that.

The series couldn't use Count Dooku too much, because we all see him die in Revenge of the Sith. So it became necessary for writers to create an apprentice who would go around and do all of his dirty work while he spent time keeping the droid armies and the trade federation in line. So that's when they created Asajj Ventress who became his acolyte and assassin. But the writers skirted the whole "Rule of Two" by saying Dooku would only impart Dark Side training to her, but not actual Sith Teachings. Essentially, what got created are two different things (not to mention an "out" for future writers which can seem a bit cheesy).

So is the "Rule of Two" a smart idea? In the end, Star Wars is a franchise that exists to make money. To restrict the existence of other Sith yet allow as many Jedi to exist as possible seems counterproductive to me. Villains drive the Star Wars storyline; without them there is no story. One could argue that the Rule of Two governs and endorses self interest while tightly controlling overreaching ambition. The Order of the Jedi supports this premise because it decayed from the inside as each started to formulate conflicting ideologies. Think of Qui-Gon Jinn for example.

However, it can also be argued that Ventress and anyone like her that uses the force to do evil yet does not bear the title of "Sith" becomes a massive narrative "cop-out." It's easy to say that when Ventress was created/introduced, the Rule of Two got ignored because now you can have two Sith and an infinite number of things that are "almost Sith" but fundamentally, the viewer is never going to be able to tell you what the difference is. They all wield red lightsabers, look menacing, and dress in black.

Star Wars Rebels just released a glimpse of their very first villain and the picture is included below. Yeah, the new villain dresses in black. Yeah, the new villain has a pair of red lightsabers and looks really badass. According to the New York Comic-Con panel where the character was introduced, the Inquisitor's job is to track down the remaining Jedi Knights left alive after Order 66. However, the Inquisitor is not a Sith. He's an "almost Sith" just like Ventress. Is that just another "cop-out?" 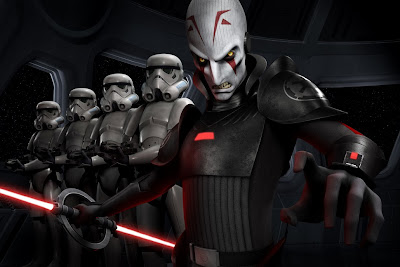 I guess in the end, I won't care and still watch the series on Disney. In fact I'm excited by it. I do hope that Ahsoka Tano comes back. She won't be a "Jedi" technically so I guess that makes her exist outside the whole "all Jedi are dead" thing too.

It just makes me ask, what's in a name anyway? In a universe of "almost Jedi" and "almost Sith" was there ever really a crisis of not finding a teacher or preserving the mystical history of the Force? I know, important questions all, right? ;P  Have a great Tuesday.
Posted by Michael Offutt, Phantom Reader at 12:01 AM

Email ThisBlogThis!Share to TwitterShare to FacebookShare to Pinterest
Labels: Asajj Ventress, I'm kind of excited about Star Wars Rebels, In Star Wars does the Rule of Two make it difficult to come up with original stories, The Inquisitor