Today a woman becomes one of the most powerful people in the world. It's about time. 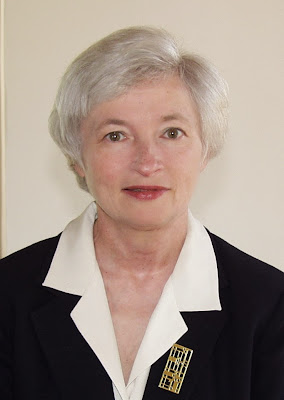 Today is going to be a special day that people should remember for a long time. It's widely expected that Janet Yellen will be nominated by Obama to replace Bernanke as the head of the Federal Reserve come January. When this happens, she will be the first woman to ever chair the Federal Reserve. And this also makes her (arguably) the most powerful policy-making person in the world.

Why would I say this? A single sentence from our present Federal Reserve Chairman earlier this year made the global market shed $3 trillion dollars in 24-hours. Yes, that's right. A single sentence. Even the president might need a couple of sentences to accomplish the same task. Perhaps even a whole paragraph. It's incredible to think of just how powerful that is. One misplaced adjective or adverb can make you lose money, can impact your retirement, can threaten the financial future of your entire family. If you don't live in the U.S. and think you're safe, you're dead wrong. The Nikkei, the Hang Seng, and other markets around the world always look to the U.S. for guidance. That's why we're a super power.

The Federal Reserve Chair is appointed by the president, but once that's done it operates pretty much independently of the executive branch. The Federal Reserve does what it wants to do and only has to answer to Congress. Financial markets reinforce the notion that the Fed chair is essentially "all-powerful." I personally think it's because of QE that the stock market hasn't totally cratered and dropped a thousand points in one day (with all the dysfunction in Washington). That's how powerful the central bank just happens to be.

So who is Janet Yellen? Well she's a real life Dumbledore only her weapon isn't a wand.

1) She has a PhD from Yale and her mentor was Nobel-Prize winning economist James Tobin.
2) She taught at Harvard for five years.
3) She married Nobel Prize winner George Akerlof (another economist).
4) She served as faculty at the London School of Economics for two years.
5) In 1980 she went to work at the University of California, Berkeley.
6) In 1994, President Bill Clinton appointed her to the Federal Reserve Board of Governors.

In thinking about the strides that women have made recently with Nancy Pelosi becoming the first Speaker of the House, and with Marissa Meyer taking over Yahoo, and now Janet Yellen becoming the first female Federal Reserve Chairman, I have to ask...what's next?

You women out there might have me believe that we'll have a woman president on the horizon (I say that tongue-in-cheek of course). I guess only time will tell.

TL;DR: Today a woman becomes one of the most powerful people in the world. It's about time.
Posted by Michael Offutt, Phantom Reader at 12:09 AM

Email ThisBlogThis!Share to TwitterShare to FacebookShare to Pinterest
Labels: Federal Reserve Bank, Janet Yellen, Today a woman becomes one of the most powerful people in the world