Recreational drugs are bad but if you use them please don't participate on a panel for The Walking Dead. The Talking Dead cluster f*ck examined. 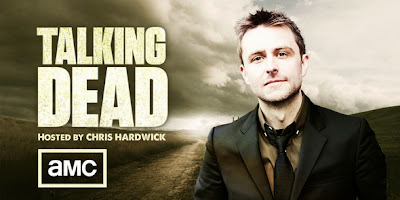 Last night's episode of Talking Dead, the talk show hosted by the Nerdist's own Chris Hardwick, had a panel of guests that included Marilyn Manson. This was a HUGE mistake. Within about five minutes, it was painfully obvious that Marilyn Manson was completely high on something. It was difficult to understand anything that came out of his mouth or to follow his logic which at times completely failed to connect with anything relevant to the show or just seemed so insane and discombobulated, you wondered where it was coming from. He'd say something that took two to three minutes to explain and the entire time you're trying to see the connection between Native Americans and colonization, World War Z, and the supposed role reversal of characters in the movie Training Day. Like seriously...it made NO SENSE AT ALL.

Here, you try to make sense of these comments:
Marilyn Manson: "The Governor had strict rules, whether they were good or not. You know, it's our opinion morally or just questionably. Just Rick didn't have any hardcore rules, until now he's started with those three questions. So Rick is kind of realizing politics need to be involved. it's almost starting a new world. It's like when people came to American and killed all the Indians. It's the zombies."
Chris Hardwick in response: "No, it's not like that at all."

Marilyn Manson regarding Carol killing Karen and David: "I think she's trying to be judge and jury, while Rick is trying to be civil. And he's more let's all decide, but he fell apart. And so you've got someone like her, and she's burning those bodies. She's suddenly like a feminist Suffragette City burning bras. I don't think it was personal."
Chris Hardwick in response: "I don't know if burning bras is the same as burning human beings alive."
Marilyn Manson in response to Chris: "No, but I think the recklessness of it. She was just making decisions on her own emotions. She's mad about all the things in her life. Maybe she hasn't gotten laid in awhile. She's like menstruating. Who knows what's going on?"
Chris Hardwick in response: "I'm not sure if I support those last two theories."

Because it's a live show, they obviously couldn't get rid of him. And Chris Hardwick tried his best to mitigate the damage by talking over him and keeping the questions aimed at Jack Osbourne and Gale Anne Hurd. However, it made me think of how incredibly selfish "being high" and then participating on a panel happens to be. You've got legions of fans who watch this show and want to discuss topics like 1) what the hell is going on with Carol and why has she become a psychopath? and 2) who is the voice on the radio and does that mean there's another camp out there that's managed to not only hold off the zombies but has the ability to broadcast over the radio, and 3) do you think Carol would go all psychopathic on Daryl (given that she has love for Daryl) if he came down with everyone else's plague?

If I had paid money to see this panel (like at a Comic Con) I would seriously be pissed off.

Now, I don't think that a public appearance by a stoned Marilyn Manson on any show or in any place could possibly damage his music sales or his reputation. On the contrary, it might actually grow as groupies of his would flock to one of his interests, zombies, even if they already weren't fans of the show. However, how can you possibly have any kind of intelligent discussion on any topic, let alone zombie fiction, when one person is continuously interrupting with nothing relevant to say because their mind is basically shot?