I joined the cult of Tebow 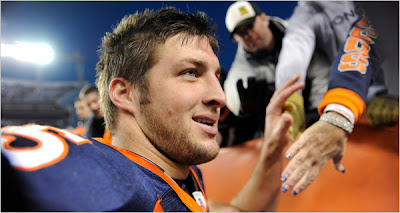 I don't like football. I don't watch it. And I don't know many of the players. But, I think that this is going to change next year as I have become an unwilling follower of the cult of Tebow. Allow me to explain the term "unwilling". It means in this context that I cannot stop myself from watching him. It probably started weeks before the wild card game where he shot down the Steelers with a play that left me standing and staring at the television and thinking "I don't believe this." It probably started because of Saturday Night Live's skit first alerting me to the "over the top" behavior of this now world famous quarterback. Millions of internet memes pounding my eye sockets as I travel websites like Reddit and follow links that appear on my google homepage are probably responsible. Anyone that knows me knows that I am influenced by advertising. I do follow trends. That's just me. I can't help it. So I got sucked into the Cult of Tebow...all of this despite the fact that I don't believe in god. But none of that really matters now does it?
I have no concrete explanation for why I like him. Only mixed feelings searching for an answer. I also felt sadness. Sadness when the Patriots completely crushed the Broncos on Saturday. I've never felt that for a football team. I don't understand where the emotional investment comes from. I experimented on Sunday by watching the Giants play the Packers, and I felt nothing. I could care less for either team and could care less who won. I also tried to see why people like Tom Brady, and he just looked like an emotionless angry robot that was as loveable as a swather that cuts down wheat on a field.

So that is the key (at least for me) in watching sports. Does that even make any sense? I have to have the ability to root for a player. Without that, the game is meaningless and kind of boring.

It leaves me with a question.  Why do I like this uber Christian underdog? Well he's exciting, he's unique, his confidence is undeniable (maybe it has something do with this)....

In the end, I have no idea.

But he has "IT" quality. A thing that defies my ability to provide a definition in words but is akin to Charisma (but obviously something more than that). People with "IT" command attention.  Whatever you want to call it, he had the ability to wake a fat wet bag of cement (which is what I see myself as) from his apathetic take on football and tune in to watch. I guess next fall I'll be watching the Broncos and Tim Tebow. For now, I'll just have to be content and read his book. Life is so strange, but then again, so am I.