I'm a fan of The BBC's Merlin. I own the first two seasons and still have the season finale of season 3 on my DVR. But really all you need to know if you haven't watched it is that there's a lot of homoerotic tension between Arthur and Merlin, Arthur and Merlin are roughly the same age as opposed to one being an old wizard and the other a kid, and Guinevere is black (and doesn't come from a noble family). Oh and Uther (Arthur's dad) was a bigot making all wizards go deep into the "closet".  In season 4, he's dead (which took forever to happen). I'm glad Arthur is finally king.

Essentially, it has nothing to do with the actual story which is why I kinda like it.

Here are some pics to whet your appetite; some are courtesy of my new bloggy friend at Hollywood Spy. 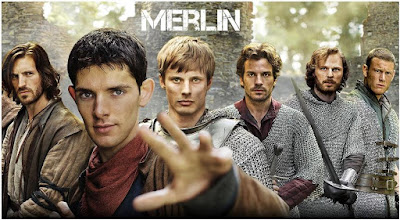 If that's too much armor for you ladies out there then here's something more appropriate:

They all have British accents too. And yes...these are the "Knights of the Round Table". Don't believe that the nutrition and razors in the middle ages produced men like this? Well that's why it's called Merlin because there's magic too. And as you can see...magic makes anything possible. Here's more:
Does there really even need to be a story with actors and actresses that look this hot? Catch the action with me on the SyFy channel.

See you Wednesday with my Insecure Writer's Support Group post.
Posted by Michael Offutt, Phantom Reader at 12:03 AM