The Curse of Gremdon by Ciara Knight 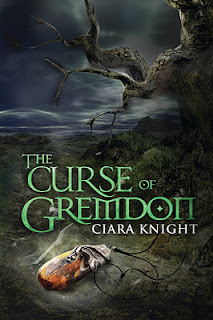 I bought and read the Curse of Gremdon. This novel by Ciara Knight is the first romance novel I have ever read and I really liked it. I give it five stars out of five.

Curse of Gremdon is more than just a romance though. It is a good ole fashioned sword and sorcery novel (with the emphasis on "sword" and very little if no "visible" magic at all). It's what us nerds might call a "magic poor" world. But the description fits and the world-building is amazing. The book is mostly told through the experiences of Arianna. She's an amazing warrior with the spirit of Grace Jones' character in Conan the Destroyer but with a component of beautiful femininity that the afore-mentioned character never had. And Tardon is every bit a testosterone-fueled warrior who lops off heads with one arm while embracing his true love with the other.


The song done by Bryan Adams called "Have you really loved a woman" comes to mind when seeing Arianna through Tardon's eyes. The story is thick with erotica (and I loved this) and it NEVER gets old. If you are looking for a sexually-charged story that is borderline pornographic yet maintains the side of art instead of descending into details of what goes where and also has an incredibly engaging story, then this novel is for you.

Yes, it's an adult book. But I'm an adult and I loved it. There were several times when the heat from the pages made me fan my face and think, "wow...Ciara is such a damn good writer."

And the story is in no way predictable. There's a plot twist in there that came out of nowhere. I thought the story was going to be linear...you know...as a reader I had it "all-figured out." I was going to give it four stars because of this. But Ciara surprised me with her cleverness and my eyes opened wide when I realized what was going on.

Tardon for all his brawn though is so wimpy when it comes to child-birth. I guess that makes this tough guy kinda cute.
INTERVIEW:
1) First off, I just wanted to say without gushing too much that you are an amazing writer. That being said, I wanted to ask you on some pointers on how you wrote your sexually charged incredibly steamy scenes? Are there words you would tell others to steer away from, and did it flow naturally or were they really difficult? I've tried to write something similar, and I always thought I ended up crossing the line.

Michael, you are so sweet. *blushes* I’m thrilled that you enjoyed the book so much. I LOVE the story and there is still so much more to tell!

Okay, wow, start with a tough question. ;) I’ll be honest, during the first draft the scenes practically wrote themselves. Tardon and Arianna were two characters that took over and didn’t let me have much say in what was happening. You’ve gotten to know Tardon after reading the story, so I’m sure you can understand that he wouldn’t tolerate my author voice interfering at all. J

As for words to avoid, it wasn’t until editing that word choice took some extra thought. My world is fantasy, so I wanted to avoid any modern terms. I think one of the most important things to remember while writing any scene is to stay true to the world you’ve created; otherwise your reader will be ripped from the moment.

My intent for this type of romance was to describe a setting and what the characters were feeling, but not to list each movement and action. I didn’t want to spell everything out. That would be intrusive to the reader’s journey. I think a writer should be able to describe something to a certain extent, but leave some of the actions to the reader’s imagination.

2) Who would you have star as Tardon? How about Arianna? You can pick anyone from any time period. I'm just curious. My personal pick for Tardon is Dwayne "the Rock" Johnson. Is that even close?

I think Tardon is such a strong character each reader can view him a little different. In my mind, his face resembles Chris Hemsworth (maybe a little less pretty) and the body of “the Rock” or Arnold in the early years.

Arianna HAS to be played by a curvaceous female, no skinny girl should ever play her. She has lips like Angelina Jolie, curves and a strong female air like Katherine Zeta Jones.

3) How do you channel Tardon so well? I mean he's the quintessential hunk. And do you picture him having to work out to maintain all that muscle or is he just naturally swoon-worthy?

Tardon just wouldn’t let me write him any other way. His voice was so distinct in my head, I couldn’t alter it. Due to his training schedule, he doesn’t work out. No need, the hours in the Pit keep him in shape.

4) Tell us about Arianna. More specifically, where in your psyche does she come from? She has a riveting strong female voice, but at the same time, she is completely aware of her lack of physical strength when it comes to her comrades in arms, and I just want to know how you came up with her.

Arianna is one strong girl. She is physically capable of handling many things. When I wrote this book I had blown out a disk in my back and I wanted to be tough. Since I wasn’t, and had to spend many hours in bed, I wrote who I wanted to be. It ticked me off that I couldn’t beat the pain, so I lived vicariously through Arianna for several months. They say tap into your emotions to write a better character, so that’s what I did.

Arianna is also strategic, always thinking. When she couldn’t win a fight with her own physical abilities, she’d use her brain and imagination.

5) How is writing romance fantasy different in your mind to writing say fantasy or science-fiction and how did you come up with the story for Curse of Gremdon?

I think the main difference is the character interaction. Typically, fantasy and sci-fi have little romance, and usually it is off screen. The Curse of Gremdon had more on screen romance.

I’ve always had a huge imagination. I LOVE world building and probably have ten other worlds in my head right now. I think of myself as more of a story teller than a writer. Inventing the story is the easy part, writing it is extremely challenging at times. For instance, The Curse of Gremdon started as a short story. I didn’t think I could write a fantasy novel, but when I received a rejection from a magazine that stated the story was too big, I turned it into an 84,000 word novel.

6) Last question...was it difficult coming up with the title? Now that I've read it, I think the title and the artwork are perfect. But it seems so effortless. Were there other titles you had considered before the one you chose or did you go in knowing that it would be called "the Curse of Gremdon"? Oh and is there going to be a sequel (I know I'm cheating by asking two questions here)?

I usually have a difficult time with titles, but this one was easy. Actually, that was the title of the short story.

I have outlined a sequel, but it might not be out for a year or so. This one will be a little heavier on the magic side. I can tell you that it will be held in the same world but the main hero will be Saldor. The female, well you’ll have to wait and see if his love returns.

AND because it is Friday the 13th, my Christmas giveaway has ended.  MY ADVANCED READER EDITION GOES TO...

I'll get your shipping information from you and get it in the mail.
Posted by Michael Offutt, Phantom Reader at 12:01 AM