A Little Chat With Nephylim

I'd like to introduce you to a friend of mine who writes dark gay fiction romances. She goes by Nephylim. Her blog can be found here. Be aware before you click that to visit, you'll have to agree to an "adult content" warning.

1) I'm curious about your nom de plume. Can you provide us with some background on Nephylim and why you choose a pen name instead of going with your real name?

According to legend the Nephylim were the children of 'the daughters of men' and the Malakim, or Watchers, which we now know of as Angels. In some versions the purpose of the Great Flood was to wipe the Nephylim from the earth, although the description of Noah in the bible makes it pretty obvious that he is one of them.

I have always had a facination with both fallen angels and vampires and I firmly believe that 'real' vampires, derived from the Nephylim are their descendents.

I am a pagan and do not believe in a christian god and, therefore, do not believe in the christian ideas of heaven and hell. I do not believe that fallen angels 'fell from grace, i.e. were thrown out of heaven by God. Rather that they got caught up in a political battle over the issue of whether or not they should associate with human women, and were defeated in what was essentially a civil war.

Ishtahar/ Inanna is considered to be the mother of the Nephylim and her symbols are the eye and the seven pointed star. She is the first woman to become involved with an angel called Semjaza. I I feel a lot of connection with a woman who risked, and ultimately lost everything, including her sanity, her child and her life, all through love, and of the brave angels who died for the same reason.

There is a lot of fascinating stuff out there if anyone is interested in looking into it further.

The reason that I use it as my pen name is simple. It was the name I used when I first signed up for Gay Authors, who gave me my first opportunity to have my work read. Without them I would definitely not be where I am. Nephylim (Nephy) became the person I am on GA, the part of me that is a writer. Nephy is the writer, Cheryl Headford is the boring lawyer. What is more natural, therefore, than to use the name I associate with writing as my pen name when I write?

2) Do you storyboard your fiction completely before writing or are you what they refer to as a "pantser" in the industry?

I have no idea what a 'pantser' is but I NEVER plan a story in advance. Usually I get a strong burst of inspiration from a person, a dream, once even a mannequin in a shop window. I 'see' a scene or a thread or an idea and then I start writing. From there it simply unfolds as it will. Sometimes the story takes twists and turns I never saw at the beginning as, in many ways, I am just along for the ride and the story is telling itself to me as much as to the readers. 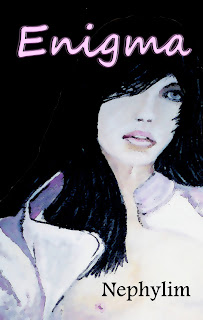 Once I start to write, the characters some alive, and I tell their story. They become very real to me and I quite often have conversation with them or do things as them. Silver from Enigma is an excellent example of that. When I was writing those books he took over my life and I did everything and saw everything as he would have. I love his simple and fresh way of looking at the word and his purity.

Publicity purposes...simple as that. I'm a complete technophobe and I never thought I would be able to make a blog, let alone want to. Then I got my book published, and I thought that was the hard bit done. But no, people started talking about publicizing it and networking and suddenly I was knee deep in blogging, tweeting, making pages on Facebook and profiles on all sorts of sites. It's been scary as hell but so much fun I am now wishing I had done it years ago.

I have rather an... erm... eccentric? dark? strange? downright weird? personality and my blog is a way to express that. It is also a great excuse to look through and at eye candy because that seems to be the way of most blogs.

One of the great thing about having a blog is the networking, getting involved with other people who have blogs. I have started to participate in a weekly flash fiction group and it has been fun and also very difficult. As I am sure you will see my problem is not about getting the inspiration to write but the disciplinne to stop.

4) Can you tell us about your upcoming book and a little about the cover art?

Well, I have two, and I hope you won't mind me being greedy because they are both equally important.

Enigma is a story that I wrote a while ago. I absolutely got taken over by it. The lead character, Silver, is, quite simply...awesome. He was kidnapped at 12-years of age and 'trained' as a sex slave. When he was 19 he was beaten almost to death for daring to fall in love with another slave who WAS beaten to death in front of his eyes. He was then dumped on the verge of a motorway to die.

After recovering from his physical injuries he completely withdrew from the world and lived entirely inside his head, unable to make decisions, responding only to orders, not reacting at all with the world around him.

The story is about his recovery and the man who helps him achieve it, and to survive the blast from the past who tries to finish the job they started when they threw him out of the car on the motorway.

I very quickly became completely taken over by him and totally fell in love with him, to the extent that I started painting him. One of those paintings had been used for the cover art.

THE UNFAIRNESS OF LIFE 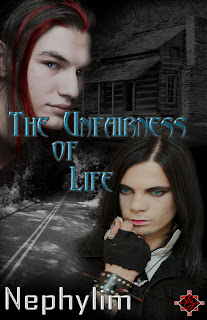 This is about Gabriel who is suffering from drastic symptoms of headaches, fits and strange delusions, after having been part of a government research programme that was attempting to unlock latent psychic talent.  He's angry at the world and everyone in it. He is remote, aloof and bitter. And then he meets Laurie who, from the first time he meets Gabriel in a night club decides that he is going to get through that unfriendly shell and gain the trust and love of the beautiful boy he can't get out of his mind.

Through sheer persistance he manages to win Gabriel over and the two go on the run, fleeing the government scientists who are trying to track him down.

This time, the scientists are not trying to hurt Gabriel but to save his life. Rather than being grateful he is angry as hell, especially when he finds that the results of the 'help' is that his psychic talents have gone haywire and he can't bear the presence and, more particularly the thoughts, of anyone else.

One of the scientists, Elena, takes Gabriel and Laurie to a secluded cabin to learn to control his abilities. Gabriel is never convinced that the government has stopped coming after him and he determined to drive Laurie away and flee either by running away from him or from life itself. When the government catches up with him again and he is taken back to the research center the experiments take a fatal turn and his only hope of keeping his life and his mind, is Laurie.

The cover art was done by an awesome cover artist called Mika Star. She worked tirelessly with me, ensuring that I got exactly what I wanted. I think my boys are beautiful and totally capture the essence of Laurie and Gabriel and the tension of the courtship and chase.

5) Will you tell us about your publisher and why you went with them as opposed to other options.

I never, ever thought that I would see my work in print (or screen). For most of my life I didn't think that anyone would ever read my stories, for the simple reason that no one had ever wanted to. Then I found Gay Authors and started posting my work for others to read, and review. People seemed to like it and I started to think that maybe, just maybe it was worth putting out there. Still I didn't have the confidence to do anything about it.

I half-heartedly sent a manuscript to some literary agents and publishers but they simply weren't prepared to take a chance on a new writer and, even worse, one who wrote literature with gay characters. I became totally disheartened and decided I was never going to try again.

And then a very good friend with his own indie publishing company offered to publish Enigma. I was completely blown away and have never been so excited in my life... well maybe for my weddings and birth of my children :) After a period of complete stress and tension between us when we clashed over editing, the book was published to my eternal gratitude by Red Haircrow, an amazing man and good friend.

And then a friend told me about someone who had set up a new publishing company and was looking for submissions. I needed some persuading to send her the manuscript for The Unfairness Of Life. I mean, this wasn't a friend, this was a 'proper' publisher. Not that I am suggesting that Red isn't but it's a different thing going to a friend, who publishes just for the love of it, to going to a stranger who makes it their business.

Anyway, after some bullying by Sandi Rush, who I love totally, I submitted the manuscript and it was accepted. That's when I was launched into what was a dream and a nightmare.

The people at Romance First Publications, are FANTASTIC. From the very first I was made to feel welcome and special. From the president, Steph Danielson, to my editor, Julie Hayes to the Cover Artist, Mika Star, everyone has been friendly, professional and excellent at what they do. They worked with me totally, even though Julie and I had out clashes, to produce what I consider to be a polished and exciting work of art.

I can't praise them enough, especially since they have accepted two more manuscripts which are in the very early stages of production.

6) Last question...what advice do you have for writers who are seeking to become published?

Don't give up. Be prepared for a lot of hard work. Don't let criticism get you down; see it as a natural process and a means to make your writing better. At the end of the day criticism is a reaction and isn't that the best thing that you can hope for... that your work provokes a reaction. Most of all, have faith in yourself and what you do.
Posted by Michael Offutt, Phantom Reader at 7:58 AM