A Discussion About Dystopia 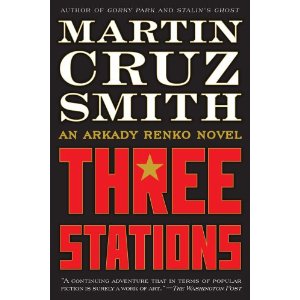 This book by Martin Cruz Smith is the latest in his Russian-themed novels. The plot is pretty simple. A girl on a train has her baby kidnapped and then finds her baby by the end of the book. I didn't read this book for the plot. I read it because I was so horrified by the new Russian reality that my "disgust" button became overpowered by my desire to stand as witness to all things horrible.

I admit it. I'm a voyeur. But I don't think I'm alone in this. Are you a voyeur to misery? Do you like it when characters suffer?

As for the book, it's a great, fast read. But I'm not going to give a book review as much as I'm going to talk about the setting in which the story takes place.

My attention as of late has turned to real-life dystopias since I see them cropping up all over the place in young-adult fiction. I started asking myself...why are so many writers making up dystopias when we really only have to look at North Korea, China, and Russia for real world examples? On the surface, the world of Russia is as dystopian as they come...at least that's what I get from Martin Cruz Smith.

NPR had him as a guest when the book was released back in 2010. I remember being hypnotized by his interview because he spoke of Russia so "colorfully" (colorful in this situation is not a compliment).  He's what you would call a "hands on" writer since he goes there to pen his novels. The man observes everything. It begs the question though...how much of what he relates to us is fiction? Probably some. But I bet it isn't too far from the truth. Much of it has to do with exploitation of kids and human trafficking. What does the nightly news have to say about human exploitation in Russia? Quite a lot actually.

For one, underaged Russian pornography has gotten a lot of news coverage because the West (read United States) is such a huge buyer of it. America certainly has its fair share of pedophiles. They hide in the ranks of Boy Scout leaders, FLDS prophets, priests, and assistant football coaches to legendary collegiate programs. But sooner or later, they get caught. And when it happens, people act sooo schocked. They say things like, "I had no idea he was raping all those girls/boys. He always played with them in the park. He goes to church, has a wife, and plants trees on arbor day!" Blah blah blah...this kind of argument will continue to play itself out until the end of time (hyperbole? maybe some).

But back to Russia. They're the ones with they dystopia, not us, right? So what are the three stations for which the book is named?

They are Leningrad Station, Kazansky Station, and Yaroslavl Station situated on Komsolmoskaya Square in Moscow, Russia. By day, they are a hubbub of activity. Picture all the stereotypes you have heard of Grand Central Station in New York City and you pretty much got the picture. But by night, it's a whole different story. If you get caught there the best that could happen is someone mugs you. The worst is that you'd end up shot, stabbed, or beaten to death. Usually what really happens lies somewhere in-between. Here's a rundown of stuff that I played witness to simply by turning pages:

Here's a sentence that I think captures the full flavor of the novel just in case you had any doubt as to how well the writer is able to capture the setting: 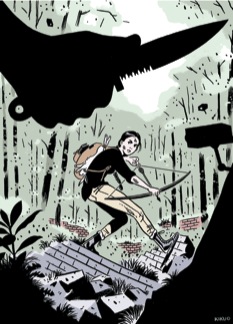 "Victor Orlov stood in a shower stall, his head bowed and his eyes shut while an orderly clad in a surgical mask, goggles, rubber apron and rubber gauntlets poured disinfectant on Victor's head until it dripped from his nose and four-day stubble, ran down his sunken stomach and naked ass and pooled between his feet."

Kinda cool, huh? Makes you want to know more? All I can think of is that Victor must be miserable. So what's behind the boom in dystopian fiction for young readers? Maybe it's as simple as to admit that the gritty harsh worlds of dystopias are a place where no one really wants to live but to which everyone is a voyeur. Are you a voyeur? Are you drawn to the sickness of humanity for a good story?

I just have three words for you.  The Hunger Games.
Posted by Michael Offutt, Phantom Reader at 7:25 AM