When music and words collide...

Have you ever listened to a song and thought that the words captured the impact and emotion of a scene that plays out in your head? Or that the song somehow captures within its tune the very essence of a character?

I thought about this when I watched the season 2 premiere of one of my FAVORITE shows this past Monday. It's called Being Human. And it's on #SyFy :))) 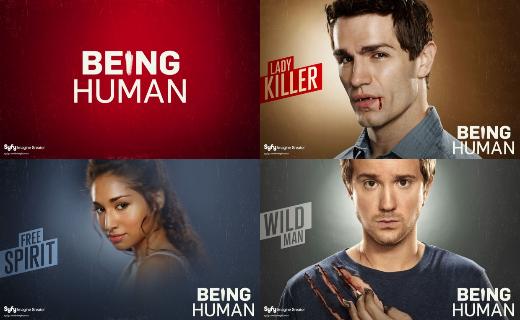 To explain the cast a little bit starting in the upper right corner...

The "Lady Killer" is Aidan. He's a really nice vampire who has some difficult choices to make because his desire to be a "nobody" collides with the vampire political elite who want him to be involved in just about everything that is going on in Boston.

The "Wild Man" is Josh who through no fault of his own has been infected with lycanthropy.  He's impregnated his girlfriend and spread his disease unwittingly to her (it would seem). So he's got a lot of tough choices too. Tough in the sense that the "paranormal" won't stop for an instant and allow him to be "normal" which is all that he ever wanted.

And then there's "Sally". She is my favorite character in Being Human because her story is so incredibly sad. Like tear-jerker sad. It really moved me when I discovered that the reason she's a ghost is because her good-looking and charming boyfriend/fiancee murdered her. She didn't know it either. We find out about it about the same time that she does. And boy does he show his true colors. She had so much love and was such a kind person. But just like in real life...those types of things in no way insulate a person from experiencing the worst that life has to offer. I'm not one that believes in karma. Bad things happen to good people all the time.

At the end of season one, there's a scene where Sally looks on from the door and the song by Oasis called "Don't Look Back In Anger" plays. It even  has the line "And so Sally can wait, she knows it's too late as we're walking on by...Her soul slides away, but don't look back in anger I heard you say..."

And it really is just perfect because it has her name, she's a disembodied spirit, and she's been very angry and because of that, it's trapped her on earth. It more or less seared her story into my brain so that I'd come back for season two. And I think that's just amazing and clever writing.

Have a great Wednesday :)
Posted by Michael Offutt, Phantom Reader at 12:52 AM

Email ThisBlogThis!Share to TwitterShare to FacebookShare to Pinterest
Labels: Being Human, Don't Look Back in Anger, Oasis, Writing Inspiration