The Wisdom or Madness of Haruki Murakami 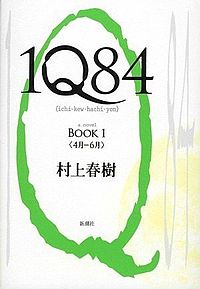 I just finished book one of Haruki Murakami's 1Q84 (he was a contender for the Nobel Prize in literature in 2011). I'm really enjoying this science-fiction novel (a big one when you consider that there are three books in one and thus over 1000 pages total), even though the "science-fiction" aspect of it seems to be at this point, specifically limited to two moons in the sky for one of the main characters, while the other, a writer, appears to be firmly rooted in the "real" world.

One of the characters, Tengo, is a writer, and he participates in publishing fraud by rewriting a brilliantly plotted novel whose idea originated in the mind of a girl who is illiterate. The other main character is a woman named Aomame who reveres her body as a temple, is bisexual, and has the skill to kill evil men with an icepick so that the deaths look natural. The story revolves around a bit of philosophy: If our collective memory is taken from us--is rewritten--we lose the ability to sustain our true selves. So Tengo rewrites a story of a teenage girl's and inadvertently she loses the ability to sustain herself.

Now, the story goes back and forth chapter by chapter between Aomame and Tengo. I have no idea if Aomame is the character being written about by Tengo (she seems just as real as Tengo to me but is living in a world with two moons), or how she ended up in the world with two moons other than the conscious decision to leave a taxi during a rush hour (a world with one moon), to climb down a utility ladder from the elevated expressway, and all so that she could meet a deadline in order to kill a very bad man. I find the fact that the taxi driver knew that her getting out of his car would change the universe in which she lived somewhat eerie. But I doubt if Murakami will ever return and explain how the driver knew anything at all much in the same way that J.J. Abrams provides very little as far as answers to fans of the television series LOST.
One of the things that I find most intriguing about book one of 1Q84 are all the statements that Murakami makes about the profession of writing through the point-of-view of Tengo or through Komatsu (his unscrupulous editor). Here are some of them:

"It has absolutely none of the usual new writer's sense of 'I want to be another so-and-so'." <== interesting observation on all new writers, or no?

"Good style happens in one of two ways: the writer either has an inborn talent or is willing to work herself to death to get it."

"When I'm writing a story, I use words to transform the surrounding scene into something more natural for me. In other words, I reconstruct it. That way, I can confirm without a doubt that this person known as 'me' exists in the world."

"He selected his words with all the care of a craftsman choosing the perfect piece of tile to fill a narrow gap in a bathroom floor...The slightest difference in nuance could bring the passage to life or kill it."

"The exact same text was subtly different to read when viewed on the printed pages rather than on the word processor's screen."

"[Editors] like [Komatsu] are looking for just one thing, and that is to find, if only once in their lifetimes, a work that is unmistakably the real thing. They want to put it on a tray and serve it up to the world."

"The conclusion of things is the good. The good is, in other words, the conclusion at which all things arrive. Let's leave doubt for tomorrow."

"The point of [writing about] a world that isn't here is in being able to rewrite the past of the world that is here."

What do you think of the statements Murakami makes about the business of writing and/or editing through the voices of his characters?
Posted by Michael Offutt, Phantom Reader at 12:09 AM