Ebert I miss you already 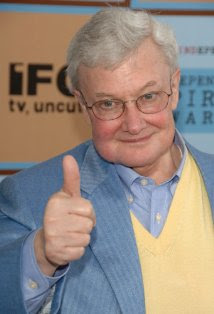 I felt deeply saddened yesterday when I learned that a man who I never met (yet felt was my friend) passed away. I came to be so deeply and emotionally connected to Roger Ebert through his writing. I discovered him more than two decades ago and much like everyone else, loved what he and Gene Siskel had to say about the movies of our time.

But to say that Roger Ebert was a film critic does not do him justice. He is the first of his industry to receive the Pulitzer Prize...a thing I used many a time to silence those in my social circle who would say offhandedly "I don't trust what reviewers have to say about movies."

These "friends of mine" would always pop off with that excuse when I (in the role of wet blanket) declared that I would not be going to see a movie and "I hope you have fun." Sometimes I'd have to resort to: "Well...let's see you win a Pulitzer Prize for anything and maybe I'll care about what you have to say. Until then shut up about that bad movie 'cause Roger Ebert hated it, and I'm going to save money and time." Anyone that knows me in real life pretty much knows that there needs to be a reason to hang out. If there is no reason, I'm not going to make up a bad one to provide an excuse to socialize. No thanks. Being alone is better than being bored with multiple people.

I trusted Roger Ebert. I loved practically every movie he told me I'd love, and my taste closely echoed his. Truthfully, I would not have seen "Jack the Giant Slayer" had I not purposefully (on a cold Sunday night) looked up his review to see if the movie was worth a ticket. Roger Ebert gave it the "thumbs up." Within ten minutes, I was on my way to the theater.

One of my favorite lines comes from a Roger Ebert review wherein he examined the awful gorn flick "The Human Centipede." He says, "I am required to award stars to movies I review. This time, I refuse to do it. The star rating system is unsuited to this film. Is the movie good? Is it bad? Does it matter? It is what it is and occupies a world where the stars don't shine."

Even when he truly hated a film or found it's very existence puzzling, he always had a way with words.

Writers we lost one of our own yesterday...one of the giants. And I don't think there will ever be another movie reviewer who, in death, will make national news.

Ebert, I miss you already.
Posted by Michael Offutt, Phantom Reader at 12:15 AM

Email ThisBlogThis!Share to TwitterShare to FacebookShare to Pinterest
Labels: Ebert I miss you already, Roger Ebert