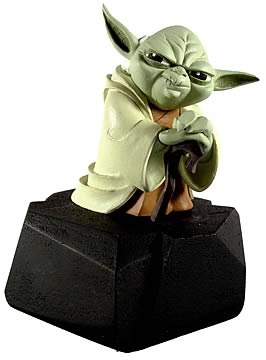 Above is a picture of my Clone Wars maquette (a little statue) of Master Yoda. I bought it at a comic book store many years ago and sometimes display it in a curio cabinet in my house along with other things I've collected. I have a couple of nice things that I like to put in the cabinet. My friend James once remarked, "Why do you have that dumb statue of Yoda in there next to the other nice stuff? It makes me think of that phrase 'one of these things is not like the other...'" 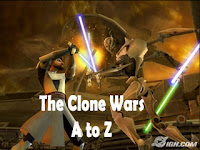 Anyway, my maquette is well constructed, looks nice, is very nerdy, and I like it! I bet Sheldon Cooper owns one. Yoda doesn't need any explanation as anyone that follows Star Wars knows exactly who he is, so I'm just going to say this: one of the things I like about Yoda in The Clone Wars is that he really doesn't fight. He's simply a teacher and takes that role very seriously. I just wish someone had told him how to brush his teeth because Yoda's teeth are atrocious. Also, has anyone ever seen a female version of Yoda's race? I'm kind of wondering what they look like.

Below, please find some pics I posted describing a scene where Yoda is doing what Yoda does best. 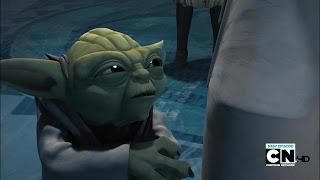 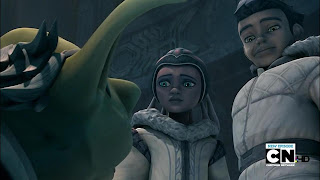 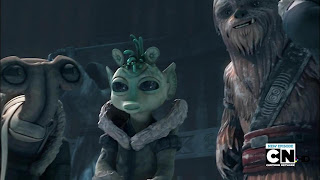 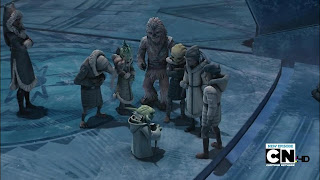 In this scene Yoda explains to the younglings that they were not trapped by the cave, but by their minds. He turns to each and points out what they have learned.
And even when Yoda faces a Sith apprentice in Asajj Ventress, he continues to teach. If you have the time, please watch this short clip. It's almost laughable how quickly Yoda deals with Ventress (who is a handful for just about anyone else). Yoda was a badass.

Tomorrow is my post on the Zillo Beast-the ultimate Godzilla tribute done by the Clone Wars!
Posted by Michael Offutt, Phantom Reader at 12:32 AM