What the heck is up with Tony Jaa? 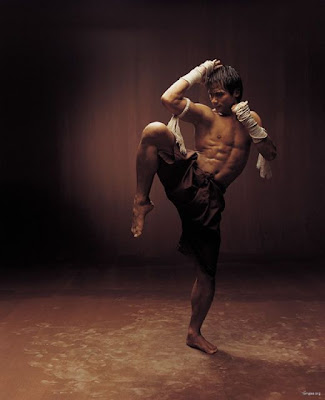 My blogging friend Mathew MacNish asked me to beta read his wonderful manuscript Warrior Monks. Matt has done a ton of research on oriental philosophy, martial arts, and the weapons that ninjas, Shaolin monks, samurai, and Chinese kung-fu films have made famous. This all kind of triggered in me a resurgence of interest in the career of Tony Jaa.

If you don't know who Tony Jaa is, then shame on you. He exploded onto the American scene around 2007 with a hit movie called Ong Bak: The Thai Warrior. The movie was short on plot, but showcased Muay Thai like I had never seen before. Jaa can vertically jump two meters, land on people's shoulders, and walk on them. He really can do this stunt and he does it in the film. He could jump through a hoop at full break neck speed, do somersaults, and twirls, and vertical pushups on elephant tusks. If you have the time, please check out the action-packed clips I have embedded in this post. It's possible that after watching them, you too shall become a fan of Tony Jaa.
I saw his next film called The Protector and there's a scene in there where he breaks the bones of like fifty guys. There's also another scene done in one shot where he runs up a spiral building basically annihilating everyone that gets in his way. The guy was a one man wrecking crew, and I loved it.

So after reading Warrior Monks one evening, I flipped to the internet to find out what had happened to Tony Jaa and if he had anymore great films coming out.

I discovered that he left the film business and became a Buddhist monk in 2010.

Like...really? What the hell?
Who goes and does this in 2010? The guy is single, rich, handsome, had the world right there...probably could nail any woman that he wanted or afford anything that he desired. He was a living sex symbol, has legions of adoring fans in Thailand (his native country), and a movie career that was just starting to explode. Basically, he was getting enough "power" that he could make any movie that he wanted. And that probably goes for America too. Like he could come here and demand what he wanted in a script from Hollywood and they would green light it.
Maybe if I understood Buddhism more, then I could somehow relate to this scenario. But I have to say I'm disappointed. I wanted to see more action films from him.

So I guess this blog post is an open letter to Tony Jaa who will probably never read it anyway since he's in a monastery somewhere in Thailand and I can't imagine that there is internet or WiFi there.

Please pull your head out of your ass and get back to making good movies. I wish you the best.
Your adoring fan,

Email ThisBlogThis!Share to TwitterShare to FacebookShare to Pinterest
Labels: Buddhism, Matthew MacNish, Muay Thai, What the heck is up with Tony Jaa