HBO's The Newsroom makes me thankful for NPR

I'm really liking Aaron Sorkin's new drama on HBO. You can read my first post on this located HERE.


This week's episode of "The Newsroom" brought up a topic that I had not previously considered...that it's important for there to be one hour devoted to news per day that doesn't have to compete for the same advertising dollar as the audience of The Jersey Shore.

Will McAvoy gives an opening "Editorial Comment" in which he plays an apologetic senator's recorded tape and uses this to launch into his own apology, in which he cites his show's failure in the past to report responsible news. In short, ratings instead of content has been driving the national discussion.

I have to say, Will McAvoy has got an excellent point.

Then enters Jane Fonda. Now, Fonda is pretty much a legendary star. And she said basically nothing during the majority of this episode. But I was expecting her to say something. When she did, it was in answer to the aftermath of the congressional elections of 2010 in which many TEA party candidates were elected. In the episode, Bachmann was compared to McCarthy. I can definitely see the resemblance. But Fonda in the role of her character...not so much. I think the intent of bringing that up though is for the viewer to decide because we are the "fly on the wall."

All of that aside, an interesting dilemma was posed by Fonda's character who is the head of the Newsroom and essentially calls all the shots. She said that she has regular "business" in front of "this congress" and stated that McAvoy needed to tone it down and stop making them look stupid (even if they are stupid) because that would make her job very difficult. I don't like this at all, and it had me thinking...how much of our news comes down to us from people who may be afraid to ask the tough questions?

How much of the political and economic discussion in this country is driven by fund raising? 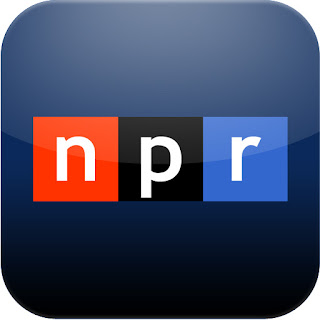 I guess I am more thankful now than ever that we have National Public Radio. I support them when I can, but I will definitely try to do so more often. So my question to you is this. Do you listen to NPR? Where do you get your news for the issues that are important to you? And do you support NPR during their fundraising campaigns?
Posted by Michael Offutt, Phantom Reader at 12:27 AM

Email ThisBlogThis!Share to TwitterShare to FacebookShare to Pinterest
Labels: Jane Fonda, Leona Lansing, NPR, The Newsroom makes me thankful for NPR, Will McAvoy stole the words out of my mouth