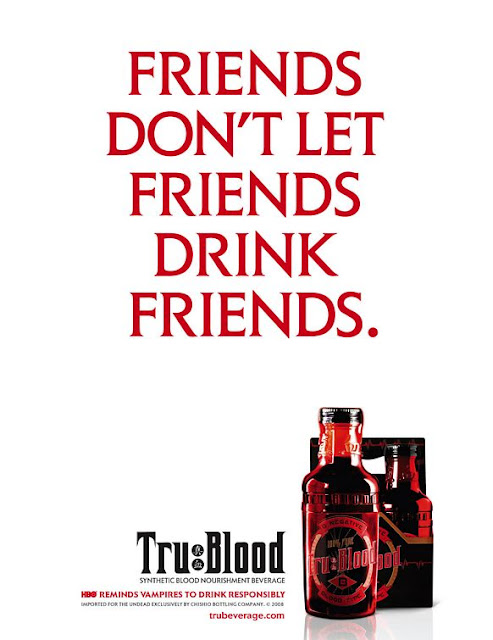 My really guilty pleasure is watching True Blood during the summer. This show is just plain awful and the writing is so bad. Yet, I enjoy it thoroughly. Here's the laundry list of things that you really should never do (from JUST one episode), but no one is telling Charlaine Harris or the makers of True Blood:

1) Half the cast got high on blood and then gave each other...piggy back rides.

2) They hired an awesome actor (Christopher Meloni) from the Law & Order series and then just gave him a few lines and killed him off.

3) We have vampire night vision. Why do we even need this?

4) We have another plot line still continuing from the past...you know, the fae one...where I guess we give bullsh*t lines to Sooki about her luminescence and how she's basically a battery and is gonna run out.

5) We have another plot line with a raging Ifrit or Efreet or some djinn thing chasing Belflour.

6) We have another plot line with Lafayette and former lover Jesus (who is now just a disembodied head with his lips sewn together). Oh and the same lip sewing happened to Lafayette who had the courage to spit in the face of the guy holding the gun on him but then didn't take the gun away.

7) We have another plot line with Lilith becoming real. Why did we need another cast member?

8) We have another plot line with Alcide challenging the wolf pack leader for supremacy. The other wolf leader is unworthy because he's a drug addict.

9) We have another plot line with humans using Barack Obama rubber masks to kill vampires. They call themselves a "hate group" and serve someone called "Dragon" but we don't know who that is yet. They managed to suck in Hoyt who is angry at Jessica for dumping him for Jason Stackhouse (his buddy). Sam Merlott is kind of in on this plot line and does a lot of sniffing and rolling around on the floor like a dog. It's bad acting, looks bad, and is just plain stupid.

10) We have another plot line with Tara as a vampire who is slowly de-icing Pam's heart. Somewhere in all of this, Tara's mom shows up and says she's married to a preacher now and that "she can't have no daughter who is strippin'! and bein' all vampire-like."

My head is spinning. How could the writers let all of these plotlines get out of control like this. Why are there now so many cast members in True Blood that I can't keep track of them? It's ridiculous.

But yeah...I'll be watching again on Sunday. So terrible, I know. I'm part of the problem.

True Blood is one of the worst things on television that you should watch regularly. If anything, it will tell you that 1) terrible makes CA$H and 2) If you want to have respect as a writer, don't do this sh*t in your stories. But then, you probably won't make #1.

Have a great Wednesday.
Posted by Michael Offutt, Phantom Reader at 12:09 AM