Why are you not watching Falling Skies? 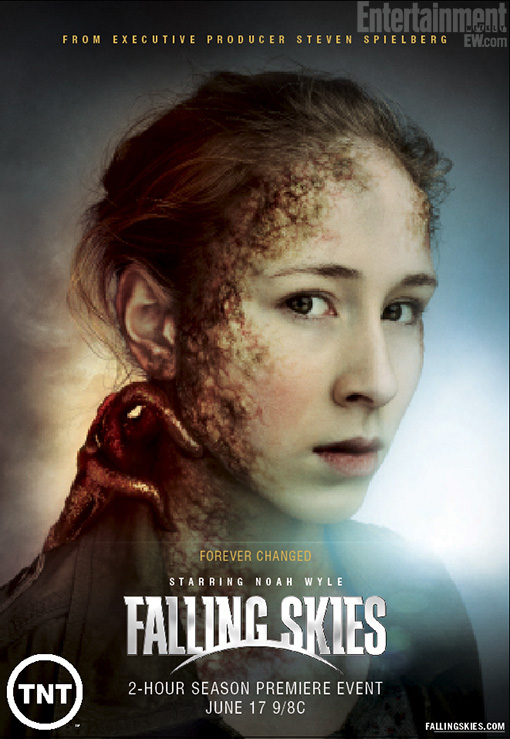 I think that I was both grossed out and intrigued by Sunday's episode of "Falling Skies" (Season 2 Episode 7). To explain, my own novel SLIPSTREAM has spiders in it. However, nothing quite as graphic as this (but in the same vein--my spiders drill holes in people's heads):
The doctor, Lourdes, and Matt came across Jamil (Lourdes' boyfriend) who looked like he'd been attacked by something (all bloody and stuff). He was barely conscious and wouldn't let them open a door that had scratching on the other side. Thinking they'd get him upstairs to tend to his wounds, he suddenly started to deflate and spiders just poured out of his mouth. It was the creepiest thing I'd seen outside of an "Alien" movie or for that matter, outside that horrible Stephen King movie "The Mist".

So why were alien spiders attacking the Second Mass holed up in a hospital? Well in the first five minutes of the show, they captured one of the fish heads. An influential one that Karen and Ben refer to as "The Overlord". And the aliens weren't screwing around. They didn't really bargain. They executed a human right in front of the Second Mass barricade, sicked their robots at them from the other side, and then in came the spiders. Meanwhile Ben, who has both super strength and telepathy due to former alien implants, verified that the Overlord was terrified of the human rebellion.

I'm disappointed that Ben left the Second Mass at the end of the show to hoof it on the open road because I like Ben SO MUCH. However, it was an incredibly tender moment as Noah Wylie (who plays Tom) almost cried hugging his son. I love scenes like that. And Tom is an awesome father. In one crucial scene, the Overlord dropped Ben by inducing a kind of stroke in him and Tom pulled out his gun and shot The Overlord without hesitation (despite them needing this powerful alien to get information or to trade for their freedom as they were surrounded). I was like, "F*ck Yeah!" I hope that they follow Ben's journey and devote at least ten to fifteen minutes an episode to him until the season finale. Otherwise, they may use him as a deus ex machina to have him ride in and save the day on some alien technology when all seems lost.
I really think that "Falling Skies" is approaching the high water mark of excellence. I'm so glad that this show didn't get canceled in the first season. It has become a regular Sunday night, summertime edge-of-your-seat drama thriller set in an apocalyptic world that entertains me as much as "Breaking Bad"...and that says a lot.

So if you're a fan of science-fiction, why are you NOT watching "Falling Skies?"