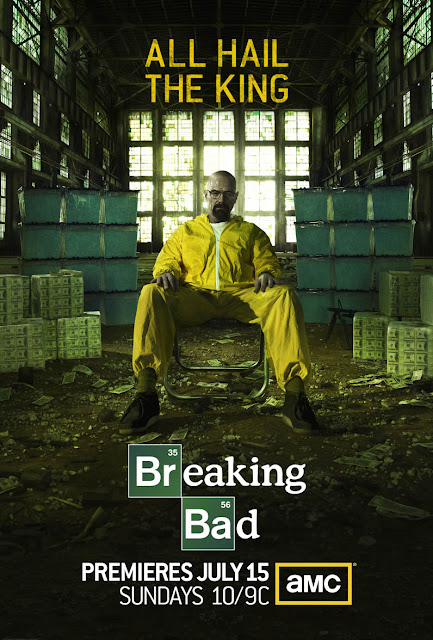 I was firmly planted on my seat Sunday night for the return of Breaking Bad. It's easily one of the finest if not best written show on television right now. Highlights from last night's episode:

1) I like how they left off pretty much at the same spot where the season finale called "Face Off" had ended. Walt's transformation into the bad guy is complete with the death of Gustavo. And any doubt that I had that Walt was responsible for the poisoning of Brock was brushed away when he threw away the Lily of the Valley plant. I mean, I really suspected that Walt was capable of this...of hurting an innocent child, but I wanted to think that this might have been a coincidence. That there was still some shred of the good Walt that we saw in season one. Nope. It's all gone. He is officially as evil as evil can get. I find myself in an odd place with Walt. He is as evil as any serial killer or any criminal mastermind, yet there is something about knowing his past that makes me root for him. I admire his cleverness. Is it wrong to admire evil when it is especially clever?

2) Jesse Pinkman is coming into his own. He is confidant. It was his idea which they employed to destroy the hard drive on Gus' laptop which the police tagged as evidence and put into a very secure room. I never would have thought a magnet used in a junk yard could be used in this manner, but I guess if the magnetic field/source was strong enough, it could happen. I have seen first hand how magnets can destroy hard drives. Maybe Myth Busters will do an episode and examine whether or not this stunt would actually work. In any event, it makes for good television. I hope that Jesse becomes a source of light in this very dark show. Skyler has gone evil and accepted that she is the "Persephone" character who resides in the underworld with its ruler "Hades". I hope that by the series end (which happens this season), that Jesse decides to abandon Walt for a fate that actually has a future.

3) Mike appears to be accepting the fact that Walt is now the King of Hell, or for that matter, is now a free agent since Gus is dead and so is the Cartel that controlled drugs to the southwest. It will be interesting to see the line this assassin chooses to walk. I know for a fact that wherever Mike does go, corpses will follow. He is as lethal as Walt is clever.

Since this is the last season of Breaking Bad, I'm just going to say that I believe the villain of this season is going to be Walt's best friend Hank. He's the only one left. I think that the D.E.A. is going to expose Walt and that it will be Hank that puts him down. And this is so screwy because to say that Hank is a villain is so wrong. Hank is a hero. But since we have a villain as a protagonist, then the antagonist has got to be a good guy.

Anyway...so excited for Sundays. Right now I'm having to balance True Blood, The Newsroom, Breaking Bad, and Falling Skies all in one night. I love my DVR.

Have a great Monday.
Posted by Michael Offutt, Phantom Reader at 12:16 AM