When I was a teenager, I started collecting comic books. One time in Moscow, Idaho in the late eighties, I walked into this  place called Safari Pearl. The lady that owned the comic book shop started to talk to me about George Perez. Up until this time, I mistakenly thought that all comic books were essentially created equal. Boy was I wrong.

There were actual artists behind these pulpy magazines. And what she pointed out about George Perez was absolutely correct. The guy was a modern day Michaelangelo, and he became my favorite comic book artist of all time. That has never changed even though there are many great comic book artists like Alex Ross and Todd McFarlane. I think George Perez brings a level of detail and dedication to any project that he does that is so good, it sets the bar for my enjoyment of a comic book.

So, with comic book movies being all the rage this summer (talked about on P.T. Dilloway's blog and many others), with "The Dark Knight Rises" destroying the box office that was left in tatters by "The Avengers" and with talk of Joseph Gordon Levitt possibly being cast as Nightwing for his own series (a classic Perez character), I wanted to tell you a little about the great George Perez because he's still alive. He's getting old, and I honestly don't know how much longer he'll be around. I have a goal to meet this guy and hopefully, my wish will come true someday at a comic book convention.

George Perez is a Puerto Rican-American born on June 9, 1954. Above and left, I've included a picture of him. He started illustrating Marvel's The Avengers. The first time that I really noticed his artwork (but didn't pay attention to who he was) was when I started reading "Crisis on the Infinite Earths". If you don't know what this series was, it was a landmark DC series that destroyed all of the various Earths that DC had created in one huge storyline to kind of get a hold of their plotlines which had gone in so many directions that they could no longer keep track. 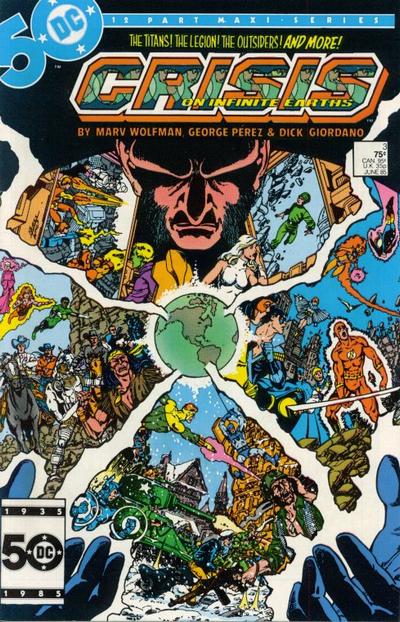 Here is one cover from the series. I want you to pay special attention to this because it is CLASSIC George Perez. He has detailed a gazillion characters in this cover and each one is carefully drawn down to their eyeballs. I also want you to note the team of Wolfman and Perez. That to me is the sign of "excellence". Whenever I saw those two on a comic book, I knew it was going to be incredible.


The very next time that I saw this combo was on the "Who is Wonder Girl" series on the reboot of the Teen Titans to the New Titans. So yeah, I bought into that. But Perez only stayed with it to reboot and then went to work on rebooting Wonder Woman so I followed him to that magazine. Wolfman and Perez owned Wonder Girl and Crisis on the Infinite Earths basically destroyed her origin because a crucial character that saves her as a child is no longer around to save her and DC just went for years after this event, never touching on the fact that Wonder Girl shouldn't be around. When Perez finally returned to the New Titans to redo Wonder Girl's origin, it was nothing less than spectacular. 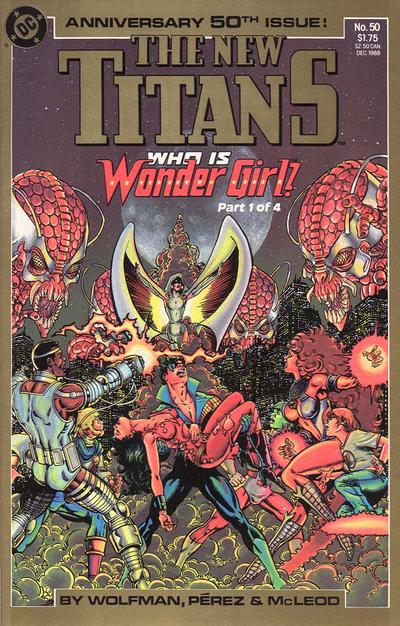 The story of Wonder Girl's new origin was amazing. And the detail on each and every subsequent cover put out in this series just got better and better. That's Nightwing front and center carrying Wonder Girl. To the right is Starfire (a character that only Perez seems to be able to draw correctly because her costume is asymmetrical), and to the left is cyborg. Behind and rising above the others is Raven who returned in a white cloak after she went missing for many issues following the Trigon the Terrible plotline. Raven was my all-time favorite character in the DC universe. She basically had the powers of a demigod, and she takes on the ultimate bad guy in this series and it's one of the best combats I've ever seen drawn on paper.

Anyway, if you aren't convinced of George Perez's spectacular talent then I'm going to include some other pictures of his for your enjoyment. Again, I'd like you to just take a look at the level of detail that this guy goes to when he does his work. It blows me away every time. I'd love to have a couple of signed prints that I could frame just to hang in my house.
So what do you think of the great George Perez? If you didn't know about him, are you now a fan?

Have a great weekend.
Posted by Michael Offutt, Phantom Reader at 6:39 AM