Will McAvoy stole the words right out of my mouth 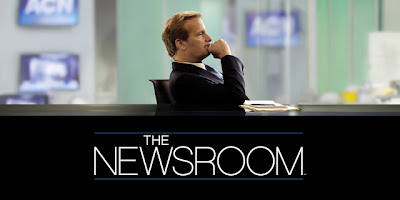 On Sunday night following this week's episode of "True Blood", HBO launched "The Newsroom" with a one-hour premiere episode. You can watch this pilot for free without subscription on the HBO website.

For those of you who are unfamiliar with the man behind this endeavor, Aaron Sorkin, he is the one that gave us the frank and sometimes disturbing movie "The Social Network" and the presidential drama "West Wing".
The opening title montage of the Newsroom is a throwback to nostalgia, looking back on an era of idealistic news broadcasters like Edward R. Murrow and Walter Cronkite.

The show opens with a tirade from Jeff Daniels who is in quite a departure from the role he played in "Dumb and Dumber". I have to say that I like this new role for Mr. Daniels. Now the afore-mentioned tirade I spoke of is sparked when Jeff in his role as Will McAvoy (in front of a room of journalism students) is asked to answer the question, "why would you consider America to be the greatest country on Earth?"

Here is the transcript of the answer in the form of a tirade. I have to say, that Jeff Daniels stole the words right out of my mouth, because I have been thinking these very same thoughts for some time now.


"And you—sorority girl—yeah—just in case you accidentally wander into a voting booth one day, there are some things you should know, and one of them is that there is absolutely no evidence to support the statement that we’re the greatest country in the world. We’re seventh in literacy, twenty-seventh in math, twenty-second in science, forty-ninth in life expectancy, 178th in infant mortality, third in median household income, number four in labor force, and number four in exports. We lead the world in only three categories: number of incarcerated citizens per capita, number of adults who believe angels are real, and defense spending, where we spend more than the next twenty-six countries combined, twenty-five of whom are allies. None of this is the fault of a 20-year-old college student, but you, nonetheless, are without a doubt, a member of the WORST-period-GENERATION-period-EVER-period, so when you ask what makes us the greatest country in the world, I don’t know what the fuck you’re talking about?! Yosemite?!!!"

So why would I say I've been feeling this for some time? Well, despite my love for popcorn television, I'm also dismayed by the fact that some of my friends don't know who the vice-president of the United States is. I'm dismayed that Christian fundamentalist textbooks tout the Loch Ness monster as proof of Creationism and that these kids will become adults and believe this hogwash. You can find that article HERE if you don't believe me. I'm dismayed that there is a universal decline in literacy in this country and that we've gone from a country that used to support poor people to one that now attacks them. I'm dismayed at the partisan divide which has grown so wide, it is difficult for me to see how it will ever be fixed. I'm dismayed that we have the best colleges in the world, and Americans can no longer afford to attend them.

I'm looking forward to many more scenes like the opening of Aaron Sorkin's new drama on HBO because he has a proven track record of filming intelligently written dialog that will cause you to reflect upon the narrative piping in over your television every night. He also knows how to pick out and create memorable characters. This cerebral "popcorn" television may do nothing to ease any of the troubles that plague the United States (economy aside), but I can tell Will McAvoy is being written by someone who feels just like me.


Below you will find an embedded video of Neil DeGrasse Tyson expressing perfectly how I feel regarding the state of education within the United States right now. If you have time, please watch.
So...did you watch the Newsroom? And are you as frustrated as I at what is going on in our country right now? I look forward to reading your comments.
Posted by Michael Offutt, Phantom Reader at 12:23 AM

Email ThisBlogThis!Share to TwitterShare to FacebookShare to Pinterest
Labels: Aaron Sorkin, America is Great, Atheism, Christian fundamentalists, Keep religion out of the science classroom, Neil DeGrasse Tyson, The Newsroom, Will McAvoy stole the words out of my mouth