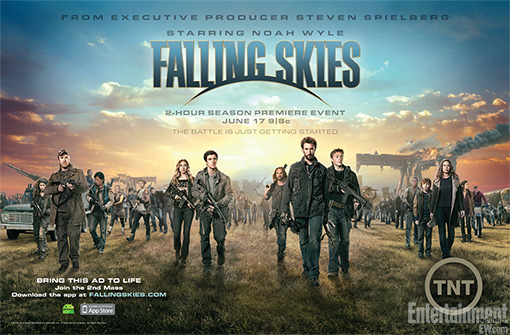 There may be some spoilers in this blog post. >,<

Three months of in-world time has passed between last season and the start of this one. First off, I love the alien invasion story of Falling Skies, and I was glued to my seat last night for the two-hour season two premiere. If you are a fan of dystopian apocalyptics, then you might want to give this science-fiction drama a try. It has all the elements. People overcoming huge obstacles to ban together to drive aliens who have already conquered Earth back into space, cute boys and girls (there are no fat people in this show and everyone is in shape despite the scarcity of food resources), and computer generated effects galore. The fact that everyone is gorgeous doesn't bother me. I'm pretty much used to it and have grown to accept/expect it in my television.
But behind all the glitz of the show's significant budget, good writing, and eye candy, there are solid themes of fatherhood. Noah Wylie plays Tom and the most important thing to him in the world are his three sons. And it's just refreshing for me to see a single dad portrayed in such a good light. On top of that he's an exceptional former school teacher, so he's really smart, reads, and is constantly teaching his sons how to grow into good men with strong moral compasses. The other thing that I appreciate about the show is that it steers clear of religion for the most part. People are conquering their own fears and their insecurities through love, companionship, and dealing with the situations without resorting to on-screen prayer to alleviate despair.
They've also borrowed a page from H.R. Geiger and the Alien franchise by using creepy body invasion. The alien conquerors control human children with biological harnesses and then last night, we saw the doctor pull a weird worm thing out of Tom's eye that later turned into a metal ball bearing and later still, a butterfly with teeth sharp enough to cut glass.
So if you are a fan of science-fiction, join the saga of the 2nd Mass (Second Massachusetts) as they resist the invaders from another world. It's on TNT on Sunday's this summer. I'm so glad I have a DVR so that I can record True Blood (which shows at the same time).


Questions I want answered this season:
1) What's up with Ben? Is he ever going to be truly safe from the aliens?

2) What did the aliens do to Tom? They really screwed him up. Did they put more of those worms in his body?

3) What does the flying butterfly worm thing do aside from cut glass?

4) Why did they let all the people go at th same time as Tom by just dropping them off in a field? Then they massacred them while Tom walked off? It's clear that they did not value the other humans at all, but put extreme value on Tom. I'm thinking it has something to do with his son Ben. It also seemed like they wanted Tom to see that they spared him.
Posted by Michael Offutt, Phantom Reader at 12:07 AM