The Sholes Key by Clarissa Draper 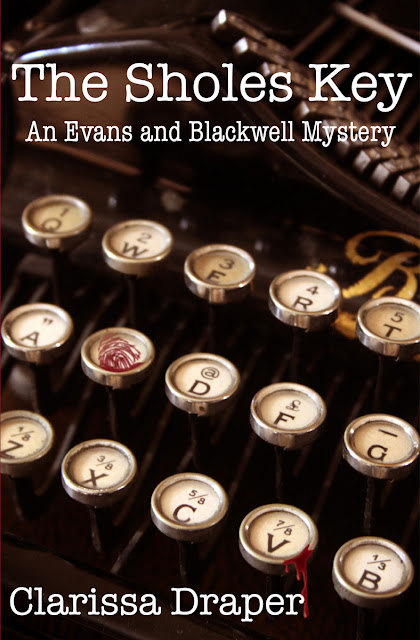 The Sholes Key is a real page turner. It's a book that reminds me of Whispers by Dean Koontz. I don't know if any of you read any Dean Koontz, but it has that same edge-of-your-seat thrill that I expect from one of his novels.

The Sholes Key takes place in London, and Clarissa immerses us in action pretty much from page one. Furthermore, I got so into the story that I actually felt like I was in Britain.  The dialogue carries the accents that you'd expect to hear when visiting there from America. As a fan of James Bond movies, I really liked this. When I finished, I was so impressed with the book that I did a little research. I guess that this is a book that's part of a larger series, however, it easily stands on its own. I'm definitely going to pick up the others.

The Sholes Key is a cerebral read. Now as a reader, you might ask why would I say that? One of Clarissa's characters, Sophia, is a genius code-breaker. And the kind of code that she has to break in this novel is similar in difficulty to the stuff you see in Dan Brown's Davinci Code. And if she fails, the stakes are quite high. You see, there's a monstrous serial killer on the loose, and he's strangling and mutilating women. And just for your information, this book gets gory. If you don't like gore, you probably will be grossed out by the book. But it's written so well that you might want to chance it in order to read a thrilling novel.

As far as the mystery in the book goes, Clarissa is an incredible plotter, using numbers and codes, and hints to provide just enough information, that you feel compelled to try and figure out the puzzle.  But when you can't (because it's hard) she does give you an answer at the end.  I got pretty close to figuring it out, but close only counts in horseshoes and hand grenades, right?

In addition, Sophia has a sub-plot working as a spook (this is a word I had never seen used before) in the British context for MI5 in order to stop a terrorist. It was refreshing to see a female in the role of seduction instead of a male (James Bond anyone?), so the plot is one of the most original mystery thrillers I've ever read. And Sophia is an incredible protagonist. She's gorgeous. She's a genius. She can cook. She breaks codes. She's a secret agent. She busts terrorists and serial killers and packs a gun and isn't afraid to use it. Wow.

The Sholes Key is a no-business, take off running, kind of book. I don't think there's a single page wasted, a single word that is used incorrectly, and everything means something. You think a detail is extraneous and she comes back to it later and you think...damn, why didn't I see that? And at its best, it's also unpredictable.

I give this book five stars out of five. I can't think of anything that I would add or take away. Way to go Clarissa.

Buy it on Amazon HERE

Mark it "to read" on Goodreads HERE
Posted by Michael Offutt, Phantom Reader at 12:10 AM