Susy Asylum is on its way and here's the cover

I loved Michael Pierce's debut novel, Provex City, and I'm so excited that Susy Asylum is on its way to a kindle near me. Click HERE to read the review that I did for Provex City in August of last year. And without further adieu, here is the cover art: 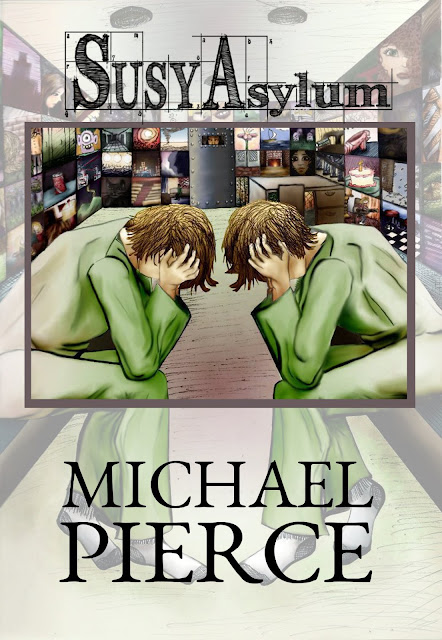 Oliver and Desiree are introduced to the writings of the mysterious blogger, Commodore Chaos, when they return to Provex City to indulge in what the sublime city has to offer. The blogger claims the Lornes are collecting people venturing between the higher planes of awareness and locking them away in their mythical asylum. But are these legitimate concerns for inter-plane travelers or just the ramblings of an anonymous conspiracy blogger?

Oliver looks to the city as his only connection to his father while Desiree looks to the city as an escape from the torment of losing her best friend—again. Provex City is a wonder of beautiful treasures, entrancing them to continue returning. But behind the beauty, wolves have continued hunting Oliver, a boy who is still mostly unaware of his importance in the rebellion.

Oliver’s belief is waning. Desiree will not always be by his side. Mr. Gordon will not always come to his aid. Oliver finds himself alone, forced to confront his biggest fears, fight his inner demons, and face the very cold reality that no one is coming to save him.

Welcome to SUSY Asylum.
*****
So what do you think? Will you be picking up Susy Asylum on day one?

Also, last week author and blogger Donna Hole wrote a review of my book. If you have the time, go check it out HERE and meet another blogger who is incredibly supportive of authors.
Posted by Michael Offutt, Phantom Reader at 12:03 AM