Dwayne Johnson is the most interesting man in the world

If he were to mail a letter without postage, it would still get there.

When it is raining, he is thinking of something sad.

He is fluent in all languages, including three that only he speaks.
Dos Equis would have you thinking that some old fart is the most interesting man in the world. I, however, disagree, and I'm here to make my case to you ladies (and the occasional guy that likes action films and visits my blog).
Dwayne Johnson is "The Rock." He brought us "the smackdown" and was great calling out people from the squared circle by using the words, "Candy Ass." That and he's just HUGE. Seriously, we all know that as mighty as Chuck Norris is, Dwayne Johnson could own Chuck in his prime (sorry Chuck).
When Bin Laden was killed, Dwayne Johnson was one of the first people in the world to know about it and tweeted as much before anyone knew anything. In case you were, ahem, living under a rock and didn’t know, Dwayne ‘The Rock’ Johnson tweeted at 10:24 pm Eastern time (more than an hour before Obama’s speech, which was at 11:35 pm Eastern) that he, “Just got word that will shock the world–LAND OF THE FREE…home of the brave. DAMN PROUD TO BE AN AMERICAN.”

That's 'cause his cousin is a Navy Seal.

He's one of the few people that actually make a successful transition from sports entertainment to Hollywood superstar.

And now I know he trolls DeviantArt (which is AWESOME). How do I know? Because io9 just clued me in that he's producing a movie exclusively based off of this picture by artist Alex Panagopoulos: 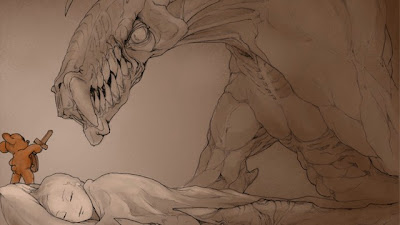 I myself have often looked to illustration to get the old muse flowing. And apparently so does Dwayne! Who knew I had so much in common with "The Rock?" The idea behind this soon-to-be-movie is what do Teddy Bears do when the children who own them fall asleep? I think it's kind of brilliant.

And if you didn't think that was cool enough, Dwayne is going to be Hercules in a new high budget feature film directed by Brett Ratner slated for August 2014 that will TOTALLY redeem those awful Clash of the Titans reboots.

Here's the synopsis taken from io9's own page:

Fourteen-hundred years ago, a tormented soul walked the Earth that was neither man nor god. Hercules, powerful son of the god king Zeus, received nothing but suffering his entire life. After twelve arduous labors and the loss of his family, this dark, world-weary soul turned his back on the gods, finding his only solace in bloody battle. Over the years he warmed to the company of six similar souls, their only bond being their love of fighting and the presence of death. These men and woman never question where, why, or whom they go to fight; only how much they will be paid. Knowing this, the King of Thrace has hired these mercenaries to train his men to become the greatest army of all time. Hercules begins to question King Cotys' motives when he takes his army out to battle and sees them practice on innocent men, women, and children of their neighbors. Deep in his soul something stirs, but is it enough to stop a mad king and his army of the damned from marching across Greece - or even Olympus itself?!

So there you have it. My case for why Dwayne Johnson is the most interesting man in the world.

As for Hercules are you #OMGEXCITED? Okay, I admit, it could be cheesy. But I see all of his movies anyway. He's kinda like the new Ahnold (I saw all his movies too until he starred in that weird one where he was pregnant). I think his career ended with that movie (whatever it was called).

Have a great Thursday.
Posted by Michael Offutt, Phantom Reader at 12:33 AM