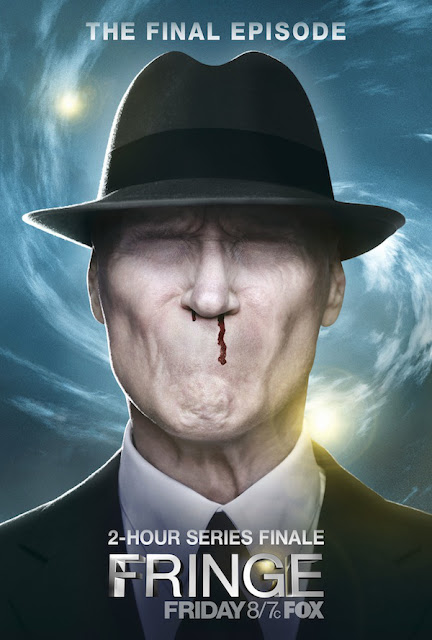 You have entertained me for five years, and our journey once again is over.

Tonight I shall be watching the Fringe series finale with millions of other loyal sci-fi viewers, and I have to say, I wish it wasn't so. When I first started following this series several years ago, I thought it was kind of an X-Files reboot with a team that dealt with a quirky monster of the week. It quickly shed itself of that legacy, however, and toward the end has become the kind of insanity where I sit back and think: are these writers crazy? I love this.

I think genius and insanity kind of go hand in hand.

Fringe took us to an alternate universe. This really isn't done enough (it's one reason why I chose to break it loose in my book). Star Trek did it well (and I don't think there's a single "alternate universe" episode that I don't like no matter what series we are talking about). But if there's a master example of multiple universes, that paragon is Fringe.

Abrams has given us a great cast. Leonard Nimoy showed up as insane Dr. William Bell who removed slices of Walter Bishop's brain because he was becoming a mad scientist (how nutso is that?). And furthermore, those slices of brain actually get put back into Walter causing his personality to shift.

Walter's own son died so he kidnapped an alternate dimension's "son of Walter" to adopt as his own.

Olivia has had just about anything you can imagine happen to her. Including being a young woman and working with her daughter (who is the same age) because the show decided to leap forward 23 years from the previous season and just start up there.

Why the hell not? Right? But it works.

And when you think of insects stuck in amber, you ain't seen Fringe yet. Whole buildings are encased in Amber. Here is a list of five ways in which Fringe is one of the best science fiction series ever even as it ends:
1) Fringe made bald guys stylish and scary with the freaky observers from another dimension. They're a cross of the Agents from the Matrix, with names borrowed from the calendar (who names their kid September?), and dared to show a race that's a total sausage hang (I've yet to see a female observer). But that wasn't enough, they also crossed into Vulcan territory, borrowing the insane logic of that race and coupled it with the Borg's "resistance is futile" mantra. Bravo Fringe Bravo.
2) Fringe had the coolest scene breaks ever. You know when you are reading a book, and there's a cool scene break that looks like a butterfly or a dragon or a palm tree and you think...damn, that's kind of cool! Way better than three asterix (what my publisher uses). Well Fringe has frogs, six-fingered hands, and other cool scene breaks. If I were stoned and twenty years younger I'd say "That's so meta dude."
3) Fringe dared to give us a family. We haven't seen that kind of sci-fi mom and pop stuff since Lost in Space! Fringe has Walter Bishop, son Peter Bishop, wife Olivia, and even a daughter in the fifth season that's integral in everything even after she gets smoked. Oh and there's Astrid. She's the token black woman. But I like Astrid because everything that falls through the cracks, she catches.

4) Fringe gave us consistent urban science fiction without vampires and werewolves. That in itself should win an award because urban fantasy as a genre is replete with vamps, werewolves, witches, and angels. I'm not saying that's bad, I'm just saying it's not particularly original.
5) Fringe totally owned quantum mechanics (and quantum weirdness in general). It took the most ground-breaking concepts from the world's leading physicists like Stephen Hawking, and turned stuff like quantum entanglement, wormholes, and the Heisenberg uncertainty principle, and made them into episodes that BLEW MY MIND!

Goodbye Fringe. I laughed, I cried, you became a part of me. The two-hour series finale airs this evening beginning with an episode called "Liberty" and ending with "An Enemy of Fate."
Today is the second-to-last stop in my book tour. You can find me at the blog of super science fiction writer M.PAX HERE. Please stop by to say hi if you have the time. If not, no worries. See you Monday when I get to do a cover reveal for Julie Flanders. Enter giveaway...you know you want to...
a Rafflecopter giveaway
Posted by Michael Offutt, Phantom Reader at 12:00 AM

Email ThisBlogThis!Share to TwitterShare to FacebookShare to Pinterest
Labels: An Enemy of Fate, Five ways in which Fringe is one of the best science fiction series ever even as it ends, Fringe, J.J. Abrams, Liberty, Lost in Space, Quantum Weirdness, Science Fiction News