The Consumer electronics show starts tomorrow morning here in Las Vegas. I'm really excited. So today, my friend James, my friend Tomeka, and myself (all of us here in town for the convention) decided to have some fun and see the Mirage dolphin habitat along with some white tigers. Here's one shot that I took on a particularly frisky looking white tiger at the Siegfried and Roy habitat (where I saw a rather majestic looking lion straight out of the lion king, and a few leopards). I'd post the video of the dolphins that I took, but it's upside down and don't have the time to figure out how to turn it right side up. But the shots are incredible...only a few feet from them through glass. 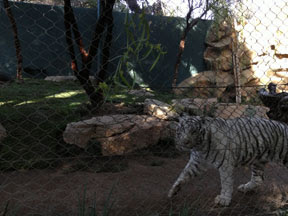 And then Monday night we went to see David Copperfield at the Hollywood Theater in the MGM Grand hotel and casino. I've been a fan of Mr. Copperfield for many years. Seeing him live is absolutely incredible. He made entire audience members disappear and teleport to other areas of the theater. He made a car appear out of thin air, levitated some random guy in the audience, and then did this really touching tribute to his father and grandfather who thought he could never make it in show business. He asked someone, "what do you collect?" After hearing her answer, he said that he collects words. Things that he finds worldly or inspiring. And then he made someone pick a word at random from a display of 100 words and then that one word printed on all of our show bracelets throughout the audience. That was a neat trick. 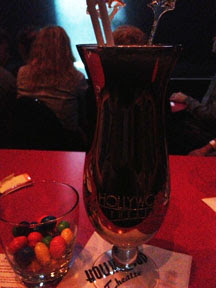 This is my glass from the pina colada that I ordered. It's a collectible glass so I get to take it home with me and put it in the cabinet where I keep other things that remind me of trips that I've taken. We had really good seats to the magic show, just one row of folks before the stage.
At one point, he did this kind of random chain thing with the audience and told us that he'd just been to the future, and he had a poster that he wanted to show us to prove it. He picked on one person to come up to the stage and write down a dead celebrity's name (then he turned the poster around). But you can see that the poster of Elvis isn't just an ordinary poster, but one comprised of words (some of which spell the exact audience members and what happened randomly to arrive at the point of the big reveal). It was really awesome. 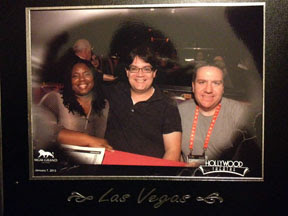 And here's a picture of my friend Tomeka on the left, me in the middle, and James on the right.

Today, I'm scheduled to appear on Cherie Reich's blog at some point. Thank you so much for following and commenting on my book tour. Tomorrow I will post a bunch of pictures that I take from CES (my day begins at 7 a.m.) And then at night we are seeing "The Jersey Boys" at Le Theatre des Arts in the Paris Hotel and Casino.

Have a great Tuesday.
Posted by Michael Offutt, Phantom Reader at 2:19 AM