Okay, so last night after I got off work it was so cold that just getting out of my car makes my fingers numb. Right now as I type this, it is 12 degrees in Utah. Ick. Don't even bring up the inversion which is giving us red air quality.

Anyway, I crashed on the couch in anticipation of watching the premiere episode of Season 3's "Being Human" which I will talk about tomorrow. I flipped through the channels and ended up on the Science channel watching a special on supermassive black holes.

I'm not going to summarize the episode, but I get suckered into watching these specials because quite frankly, they're interesting.

They had this scientist guy on there and he said that they've discovered that the mass of every supermassive black hole that is at the center of every galaxy ever discovered (there's a lot) is exactly one-half of 1% of the total mass of the galaxy. It's the same everywhere.

I started to think about this and the book "2010" came to mind because there's this totally featureless thing called a monolith in Clark's book. The dimension of the black monolith is always the squares of 1, 2, and 3. So 1x4x9 no matter where they discover it. 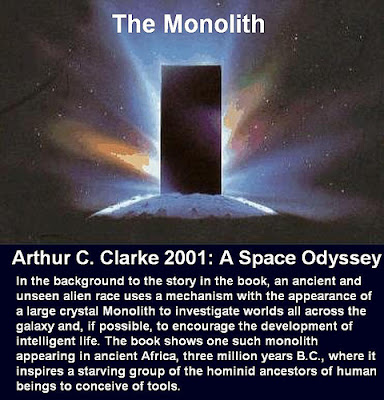 So yeah, I had this whole "WTF" moment sitting on the couch and thought of the late Arthur C. Clarke.

I'm just going to say, our universe is really weird. Like stranger than anything that you could just "make up" if you just bother to look.

Today I'm stopping by Cindy Borgne's blog, "Dreamer's Perch." Cindy hasn't been feeling well so if you have the time, please drop by and say "Cindy I hope you get better soon" :). And Cindy is a fantastic blogging friend to have (and one of the most talented science fiction authors I've ever read). She is so supportive, reading blogs, reviewing books, and helping out other authors. I can't rave enough about her and if you aren't networking with Cindy, today is the day you should start. You will never regret it.
Posted by Michael Offutt, Phantom Reader at 12:01 AM

Email ThisBlogThis!Share to TwitterShare to FacebookShare to Pinterest
Labels: It's Science, My Arthur C. Clarke WTF moment, supermassive black holes, the Monolith from 2010