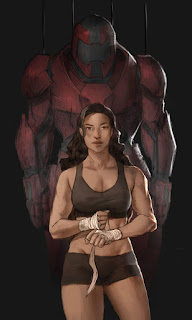 At right is a fanart picture drawn by JujuFei on DeviantArt of the character Bobbie Draper in The Expanse series. HERE is a link to the page where I took the art from. In the book, the authors describe Bobbie Draper as being of Samoan heritage, and they use this as one reason for her being incredibly tall and strong. I guess we are all used to thinking of Dwayne Johnson whenever anyone says "Samoan" so it's a pretty effective racial stereotype as it leaves little need to explain anything. I'm also not positive on how "true" it is, but it definitely works for the character as she's a kind of female version of all Dwayne Johnson's roles wound into one.

Bobbie is a Martian marine and former Gunnery Sergeant. The low gravity of Mars hasn't affected her because of the intense training that she puts herself through. Additionally, the books go out of their way to point out that Bobbie wears an older model of the Martian power armor because it fits really well (unlike the newer ones). It seems somehow appropriate in this particular illustration that she be wrapping her hands with the kind of tape you see boxers using. Her character is essentially about fighting and killing and she's a weapons expert as well as a damn good detective and overall leader. She spots everything. When she goes to work for Chrisjen Avasarala, she figures out pretty early that Chrisjen's assistant is up to no good, tracks him to a clandestine meeting, and then exposes him to Avasarala who promptly fires him. 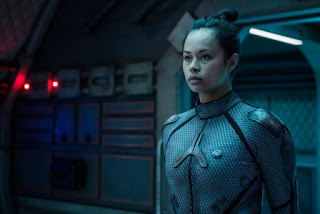 The actress who plays Bobbie Draper in the television series is Frankie Adams. I think she does a pretty good job of playing the rather stoic and incredibly athletic Martian soldier, and she does come across as a badass, which (I think) is the most important aspect of this character. In Persepolis Rising, there's a fight between Amos and Bobbie that almost kills both of them when Amos turns to Bobbie and says, "Babs, when did you become such a pussy?" She promptly begins to put the smack down on Amos (who is trying to kill her) until he's bleeding and has got nothing left to even pick himself up off the floor.

In The Expanse books (and some in the series), Bobbie is either in the right place at the right time, or she accomplishes some incredible feats. Here's a rundown of things I noted:

1) She faces down and destroys single-handedly a protomolecule monster.
2) She takes over as Captain for The Rocinante when Holden retires, and later she becomes captain of a Laconian ship stolen from Medina Station.
3) She beats up Amos, which no one has ever been able to do.
4) She's the person who first realizes that Fred Johnson is dead during the high G maneuvers in Nemesis Games.
5) She saves Chrisjen Avasarala's life when the yacht she's in (owned by Jules Pierre Mao) takes her prisoner.

I look forward to seeing what Bobbie Draper does with her new "protomolecule" designed space ship when the next book in The Expanse, called Tiamat's Wrath, comes out in March.

Coming up on Friday: Profile of Detective Josephus Miller
Posted by Michael Offutt, Phantom Reader at 12:00 AM