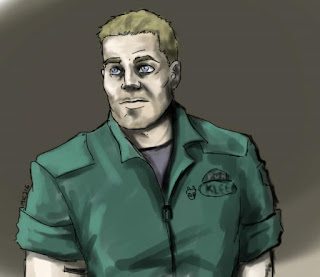 When I'm explaining the character of Amos to friends who ask me about The Expanse, I refer to him as the lovable but psychopathic engineer. Because The Expanse authors (they write under the name James S.A. Corey) are kind of light on description preferring instead to let the dialogue and other people's observations of a character carry through in their point-of-view, I've got a simultaneously vivid idea of what he should look like and a vague-ish idea of what he should look like. At right is an artist sketch, and it differs from what you'll see of Amos in the SyFy/Amazon television adaptation. However, he's got the crazy eyes, which (to the credit of the artist) is pretty amazing. The artist, by the way, is named Tabitha Drambel and you can see her DeviantArt page HERE. 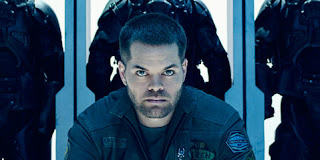 Chatham. Here's a picture of him so you can see that he also channels the "crazy eyes" rather well. So who is this guy? Well he's a really good engineer and he knows how to keep The Rocinante in really good shape as it flies through space going from place to place and getting into dogfights with other ships depending on where you are in the storyline.

The authors are careful to describe Amos as "the last man standing." What they mean by this is that in any catastrophe, Amos is so tough that he would be the last one still alive while everyone else is dead. He also knows that he's a monster, having little or no feelings about anyone or anything, and he latched onto Captain Holden, because he is smart enough to know that on his own, he is capable of doing a lot of evil. Captain Holden has a very strong moral compass, and Amos willfully acquiesces to Holden's judgement because he knows (and believes strongly) that Holden will always do the right thing. Thus far in the books, he has not been wrong.

Amos really starts to shine in the book Nemesis Games. This is where I first noticed him getting a lot of his own chapters, and they are used to follow him as he visits Earth (where he hasn't been for many years) and to honor someone that he cared for that had died. He also reconnects briefly with some thugs and a drug kingpin that he worked alongside in Baltimore many years prior (Amos still has a formidable reputation). The drug kingpin is holed up in a sizeable arcology, which is a futuristic structure that supports a city-sized population all within one building.

While on Earth, Amos also visits with Clarissa Mao in prison (his nickname for Clarissa is "Peaches.") It isn't really clear if he loves her, but I kind of think that he loves Clarissa just about as much as a psychopath is able to do. To you and I, it wouldn't seem like love. But it's written in such a way as to hint rather strongly that there is a tremendous bond between them that goes beyond respect. In many ways, Clarissa is just as much a monster as Amos (if not more so), so maybe it's a bond that comes from being a fellow psychopath. When the rocks start falling on Earth, and the apocalypse starts, we get to see how Earth is affected through Amos's point of view. Escaping Earth is harrowing and there are many edge-of-your-seat moments that I can't wait to see in the television adaptation.

I think the funnest Amos chapter, however, happened in Persepolis Rising. Late in the book, Amos calls Bobbie (a Martian warrior) a "pussy," and it starts off a fist battle between the huge Samoan woman and Amos that is clearly "to the death." But she's so powerful and strong that he can't kill her no matter how hard she tries, and she eventually beats the crap out of him to the point that he can barely move. It's super therapeutic for Amos, because he realizes that maybe he's not the last one standing in any fight. Additionally, it pretty much solidifies Bobbie Draper as the incredible character that she's built up to be throughout the entire series. Yeah, I love Bobbie Draper. She's just too cool.