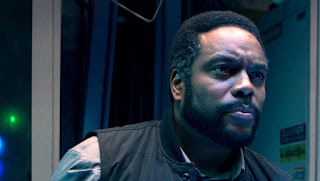 There aren't any real good pictures of Fred Johnson that artists have done, so I'll just include the one for the SyFy series. Here, Fred is played by actor Chad Coleman who we last saw on the series, The Walking Dead.

Fred Johnson is the defacto leader of the Outer Planetary Alliance (O.P.A.) because he's the guy in charge of Tycho Station. It's established pretty early on (in the books) that Tycho Station is where "the impossible" stuff happens. If you were to build a space elevator for example, it would occur at Tycho Station. They have the best space engineers and the most talent, and Tycho Station itself is a wonder of the futuristic world.

It's there at Tycho Station that the largest plot device is assembled (called The Nauvoo). It's an enormous generation ship with its own spin gravity core (it's so big in fact that it is essentially a space station with thrust). It was commissioned and paid for by the Mormons, who are wanting to use it to sail to the stars. With space being so big and speed being so slow, it's obvious that to reach the nearest star will take lifetimes. So The Nauvoo is built for that...for people to be born, live their entire lives, and die on the ship while sailing to their destination. Only it never quite gets there. At first it is used in a last ditch effort to destroy Eros Station once the protomolecule kills the 15 million people on it that call Eros home and is clearly targeting Earth. It fails because the protomolecule doesn't obey the laws of physics, and decides to go to Venus instead. The O.P.A. goes after The Nauvoo, captures it, and declares it to be maritime "booty" since it would (otherwise) be a complete loss (having been commandeered in an act of war). Then they rename it The Behemoth, and make it crucial to their fleet until after the Ring Gates open. Once this happens, The Behemoth is instructed to take up residence inside the Slow Zone (the space inside the Ring Gates) and is renamed "Medina Station." By being at the center of the Slow Zone, it is well-placed to control all traffic going to and from the 1300 habitable worlds.

Fred Johnson also has a nickname. He's called The Butcher of Anderson Station because Fred was responsible for massacring a group of Belter civilians on Anderson Station when it was taken by insurgents. The battle earned him fame in the inner planets and the Medal of Freedom (the UN Marines' highest honor). But it also made him infamous and hated among the O.P.A.

Fred was a puppeteer in a lot of the events that took place in the books. He repeatedly fixes Holden's ship, The Rocinante. He allows Michio Pa safe passage to Ceres station, which sets off a chain of events that undermine Marco Inaros' power (with his Free Navy). And it's through a meeting of OPA leaders that he calls together (but doesn't make it because he dies to high-g in a battle with the Pella en route to the meeting on Tycho) that Holden has his first real introduction to Duarte (the biggest villain of the series).

Coming up next Wednesday: Profile of Bobbie Draper (I won't be blogging on Monday because it is a holiday.)
Posted by Michael Offutt, Phantom Reader at 12:01 AM