Please welcome author Cally Jackson from the "down unda." Her book, "The Big Smoke" is commercially available right now and this is the first stop on her blog tour. She wants to talk about some research she did regarding a topic that all of us can probably relate to. 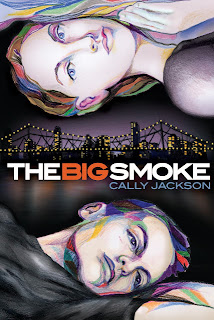 Thanks for hosting me, Michael!

As Michael said, I’ve just launched my debut New Adult novel, The Big Smoke, which is extremely exciting, but I’m here to talk about a serious issue that is covered in The Big Smoke – mental illness.

Although things have improved a lot in the past decade, mental illness is still quite a taboo topic in many societies. I’m Australian and my experience of this is mostly home grown, but from what I’ve read and seen, the reluctance to discuss mental illness is also paramount in other parts of the globe.

I’ve read a number of books that deal with cases of extreme (and often sudden) bouts of mental illness, but very few that feature characters struggling to manage less intense mental illnesses on a daily basis. When I wrote The Big Smoke, I decided this was something I wanted to challenge. So I gave one of my main characters, Ceara, a generalized anxiety disorder, which is one of the many obstacles she must overcome to find happiness in this new phase of her life, studying at a city university away from her country home.

An excerpt from the first page:

What the hell was I thinking, going ahead with this crazy move? I should’ve put an end to the idea the first time Mum mentioned it. But I didn’t, and now I was moving into a share-house with Cindy Carter and Robert Grey – two people who thought I was as worthwhile as a smear of dog shit on one of their shoes.

My breathing hitched up a notch. I tried to get myself back under control but felt like I was edging towards hyperventilation. The last thing I needed was a panic attack.

I slid down the wall between the stacks of boxes and concentrated – breathe in, breathe out. Why wasn’t my daily anxiety medication helping me deal with this? Maybe I needed to up the dosage.

Shit – the tablets were still in a pocket of my suitcase. I crawled over, grabbed the tablets and hid them inside a pair of socks, which I buried underneath my neatly folded clothes. I didn’t want to risk Mum finding the tablets now. How typical that would be – I manage to hide them for all this time, only for her to discover them the day before I move out.

I’ve suffered with mental illness on and off throughout my life, but it doesn’t define who I am. In many ways, I believe I’ve become a happier, less judgmental person because of my experiences with mental illness. And I thought that could be an interesting character trait to explore in fiction. Hopefully Ceara’s journey is one that many young people can connect with, and maybe The Big Smoke will help, in some small way, to break down the silence around mental illness.

Have you read any Young Adult or New Adult books that deal with mental illnesses like anxiety, panic and depression? Do you think it’s an area that needs to be explored more in fiction or do you think it’s adequately represented?

Thanks so much for doing a guest post, Cally. I found the above gifs and thought they'd work with the theme of what Cally is talking about here.