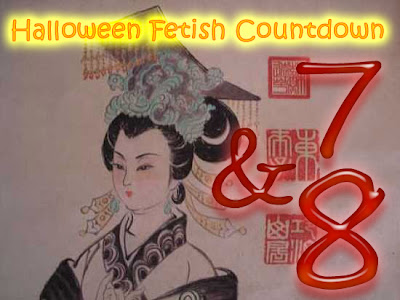 I kind of fell behind on my schedule for my creepy fetish countdown. If I'm going to meet my October 31st deadline, I need to double up today, Friday, and Tuesday. Monday I'll be hosting Cally Jackson for the beginning of her "The Big Smoke" blog tour.

It sometimes includes such activities as removing clothing from the body, posing and propping of the body in different positions, generally sexual ones, insertion of objects into bodily orifices, anthropophagy (the consumption of human blood and/or flesh) and necrophilia (the performing of sex acts on a human corpse).

Most cases of lust murder involve male perpetrators; however, accounts of female lust murderers do exist. In general, lust murder is a phenomenon most common among serial killers. These offenders have made a connection between murder and sexual gratification. When this type of offender chooses a victim there must be something about that victim that the offender finds sexually attractive. This attractive trait might be common among all of the offender’s victims and is called the offender's Ideal Victim Type (IVT). There might be many potential targets that an offender passes by because they do not meet his IVT. Once the offender has found a victim who is ideal he might engage in stalking or other predatory behaviors before acting out his fantasy on his victim. Fantasies are a key component in lust murders and can never be completely fulfilled. The lust killer will have a fantasy that continues to evolve over time and becomes increasingly violent as he struggles to fulfill it.

Some of history's most notorious erotophonophiles are Jeffery Dahmer, John Wayne Gacy, and Ted Bundy.

From Wikipedia -- A crush fetish is a paraphilia in which one is sexually aroused when usually someone of the opposite sex crushes objects, food and sometimes small animals or insects with their body, usually under their foot. The term soft crush refers to the more common fetish surrounding videos involving invertebrates (e.g. insects, worms, spiders) being crushed, while the term hard crush refers to such videos involving larger animals, (e.g. reptiles, birds, mammals). The preference could be barefoot, high-heels, flip flops, and so on, depending on the fetishist.

Crush films depicting anything other than insects are banned in the U.S. and U.K. although internet access to crushing sites (yes they exist) make these laws difficult to enforce.

From the Darwin Awards of 1999--(June 1999, Florida) Okeechobee County investigators believe the death of Bryan, 28, was related to his wife's habit of stomping rabbits and mice for sexual pleasure. Stephanie, 29, was sentenced to two years of probation and community service for the death of her husband Bryan, who was found in a pit with a board over his body, crushed beneath the rear wheel of his sports utility vehicle.

Stephanie did not deny that she drove over her husband, but in her own defence she released tapes to the police showing her stomping small mammals to death. She was identified by a cryptic tattoo on her lower leg.

If you are particularly brave, you can do a google image search of "crush fetish" and you will see hundreds of pictures of women engaging in horrific animal cruelty to rabbits, mice, and baby birds wearing high heels. There must be some market for this stuff. *shakes head
Posted by Michael Offutt, Phantom Reader at 12:03 AM