A review of Distraction by J.L. Campbell 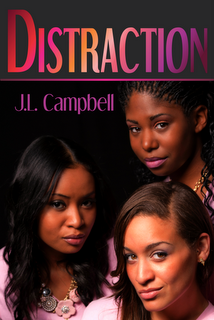 SPOILER ALERT: READ NO FURTHER IF YOU HATE HEARING PLOT DETAILS. Oh what can I say about "Distraction" that won't make me come across as judgmental because of the subject matter? First off, I want to say that J.L. Campbell (or Joy as some may know her), is a great writer. She has paid meticulous attention to providing what I think is a genuine representation of Jamaican culture in this book. And "Distraction" is a physically beautiful novel, providing Jamaican proverbs at the top of each chapter and a corresponding translation as the accent may be difficult for non-native peoples to understand. Additionally, the book has wonderful prose and in my reading, I don't think I spotted a single error. Also, each chapter is graced with a silhouette of palm trees. How can one not be pleased with palm trees?

"Distraction" is a book that follows the lives of three very interesting but destructive women. Their names are Kyra, Justine, and Dionne. And when I say "destructive" what I mean is this: they are liars, cheats, and victims who make choices that are a little difficult to get through without squirming. I had an impulse to invite them into a room, sit them down, and then stand before them on a soap box to make them accountable for all the things that they are doing while others chanted "preach on brotha!" in the background.

Kyra has trouble with an abusive man named Warren. He's a deadbeat that insists on sucking her dry of all monetary resources, on basically raping her, of trying to sabotage everything in her life, and on top of all that, he's a criminal. He's a pretty dispicable character in just having those qualities. I kind of question why Joy also decided to make him bi-sexual and then use that as a tool to paint another man, Milton, in a really unsavory light (Warren and Milton have been doing it, but more on that in just a bit). And of course, the fact that Milton is hiding a same sex attraction from his wife leads to his impotency in bed (well he's not attracted to girls) and to the willingness to destroy his family's financial security by giving Warren TONS of money for his silence. All this says to me is that in backwards Jamaica, two guys kissing is a fate worse than death. And if this is true, I guess I won't be visiting Jamaica anytime soon DESPITE my love of palm trees and my respect for Usain Bolt.

So Milton's wife is of course, one of the three women named Justine. And by the way, she's an adulterer. So it's not like her lies are any better than Milton's. And then we have Dionne who's also a liar, having an affair with a guy that's basically a stalker by the name of Alex. But she must be attracted to stalkers because her husband has serious trust issues, answering her phone, calling her to make sure he knows where she is, etc. But I guess he has reasons for having trust issues...his wife really is sleeping around. I hate the fact that Clayton is basically clueless. You'd think that at least one man in this book wouldn't be a complete douchebag. But that doesn't happen. Oh and Alex, he's a rapist on top of being a stalker...so yeah.

Did I like "Distraction"? Yes, I did like it. But these characters are not good people. Are they real? Probably. I think there's a huge dose of reality in these books and toward the end, a statement that people still believe WRONGLY that AIDS is a deadly disease. AIDS is not fatal anymore. That may be a news flash for some people, but we have drugs now that do perfectly well in controlling this disease. I have a friend with AIDS, and he's a successful college professor in a happy relationship and has no problems in living a great life.
If "Distraction" is a slice of life of what it is to be Jamaican then all I can say is, "Jamaica needs a better public education system." I would recommend this book to anyone that might be attracted to stories where characters make destructive decisions. For example, if you liked "Closer" with Natalie Portman and Jude Law, then you'll probably like "Distraction." For the record, after I got done with "Closer" I secretly wished that all those characters had gotten crushed under a bus.

I give four stars out of five simply because there were parts of this book that clearly irritated me about the characters. But aside from that, it's a great, page-turning if not emotionally frustrating read. And if you like hot but sensual sex scenes, Joy accomplishes that better than just about anyone I've read. her amazing skills made me feel like I was there in the character's skin, enjoying the naughtiness of every single action.