The Big Smoke by Cally Jackson

Yes, yes dear blog follower. I plowed through some books recently. And I'm not done telling you about them. Here is my five star review of Cally's debut novel The Big Smoke. In short, if you like new adult stuff in a pseudo present time (it's within a decade of 2012) then you'll like this story. As a heads up, Cally will be guest blogging here as part of her tour on Monday, October 29th. 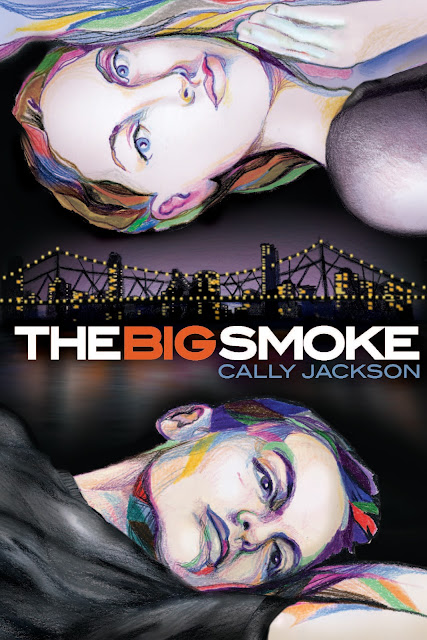 I received an Advanced Reader Edition of Cally Jackson's debut novel, and I read it in just a few days. It was THAT good. As a warning I want to say that my review may contain some spoilers, because I can't think of a way of talking about this tale without discussing what goes on in Ceara and Seb's lives.

"The Big Smoke" has two narrators. We've seen this plenty of times before most notably used by William Faulkner in "Absalom, Absalom." However, it is also used to great effect by George R.R. Martin in a "Song of Ice and Fire" and by countless other writers who use it to find a means of perspective in a story that is too big to encompass just one point-of-view. Cally's take on this is to use first-person, and it works wonderfully as a vehicle to tell her story. So expect to be inserted into the heads of Ceara and Seb alternately throughout the book. Cally does tell you which head you are in because the chapters are labeled with their names, and they both possess a very distinctive voice.

Cally Jackson is a great writer. The first character I want to talk about is Ceara. Her narrative can be summarized by something her friend Kristi says to her. "You're so desperate to be in a relationship, you fall in love with anyone who gives you the slightest bit of attention. You seem to think your life will only be complete when you have a boyfriend."

And it was at that moment in the book that I finally understood that behind the angst of being a new adult is often the search for validation, because we (guys and gals) go into college without a sense of identity. And maybe that's what college is supposed to do: give us time to find ourselves. I can comfortably say that Ceara definitely understands who she is by the end of the book, and it is through this vehicle that she attains happiness.

The second narrator, Seb (short for Sebastian) is told in an authentic male voice that oftentimes left me in awe that Cally could capture so perfectly how boys feel in the first year of college. Do we think about sex all the time? Absolutely. I often lament when looking back on my college years about how difficult the curriculum was because I had too many distractions caused by raging hormones. Sebastian really connects with this feeling. As well, she gives us a very human side to Seb by showing us the many rights of passage that men must attain to reach adulthood, the compromises of living with a roommate, and ultimately how every story has multiple points of view.

And it is in this that Cally is amazing. Seb's parents are divorced and there are two sides to that story. But the deconstruction doesn't stop there. "The Big Smoke" also has two sides (the tale of Ceara and Seb). Cally brings these two ships together by the end after they have each worked through their myriad issues and are now ultimately ready for a true relationship that will stand the test of time. And I just want to say, I love the way these two narratives interweave with each other through events like Seb saving Ceara's life, to mutual acquaintances and friends, to the university they both attend, and to the city they both call home. We know from the beginning (of course) that boy and girl will eventually come together. But the fun is finding out exactly how that's going to be done. And I liked that it happened naturally through time as they both became adults and knew exactly what they needed to make them complete.

This book is difficult for me to classify in terms of genre. I think it fits soundly into "New Adult," but I have no idea if that is an actual genre yet (even though more and more people are talking about it).

I think "The Big Smoke" would appeal to those who like "Literary Fiction." If you have read Michael Chabon (author of "The Wonder Boys") you would like this book, or perhaps readers of "The Ice Storm" might find similarities that they would enjoy. "The Big Smoke" is a complex look into the lives of college freshman that tackles issues of body image disorder, anorexia, abandonment, sex, relationships, and loss. This is a great book, and you would do good to read it for yourself.