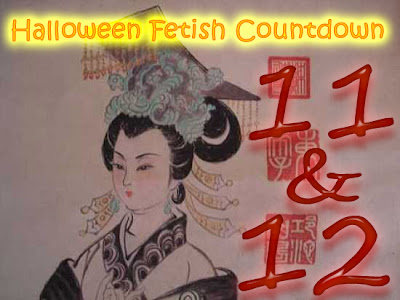 Menophilia is a paraphilia that effects mostly men (and a very small group of women). Basically, this is the closest humans might come to "actual vampires" as a menophile is a person that loves to suck on used tampons, lick maxi pads, and basically have unsanitary sex during "that time of the month." And I'm not making this up...these people do exist.

This is "fetishized infidelity." Basically this occurs when a man becomes aroused by the knowledge that his wife is having sex with another man. In some cases, this may actually involve the man going to great lengths to set up the affair but being absent when the actual act occurs. In other situations, he may even join in or take on the role of a voyeur. The female version of this arrangement is called a cuckquean fetish (and is less common.

Tomorrow is the last day of my Halloween Fetish Countdown. I've saved the best for last (I think). If you watch Daniel Tosh on Tosh.O, you may already know what I'm going to highlight tomorrow since Daniel has no issues talking about this particular fetish on Comedy Central (and makes fun of it).


Have a great Tuesday.
Posted by Michael Offutt, Phantom Reader at 12:21 AM