The work of Van Gogh had one influence on me when writing OCULUS, the sequel to Slipstream. I decided to make Jordan's mom an artist, who painted pictures (similar in style to Van Gogh) while staying in a psychiatric hospital. Kathy learns about this when she visits her advisor who worked on the case, and he tells her a story of how the images that this woman painted came to haunt him for years. Later, Kathy is viewing one of these paintings on her iPad when she accidentally opens a portal that allows her to converse with her mother for the first time in her life. The entire conversation plays on a video player, only Kathy can feel a breeze emanating up from the iPad while her mother tells her about the history of the Watchers and a coming war between angels and demons.

Below you will find a digital painting created by artist Alex Ruiz in an attempt to reinterpret Vincent Van Gogh's work "The Starry Night". I think it's stunning.
In reading about Van Gogh, I learned that he had a form of epilepsy that could descend upon him at random, cause him to black out, and when he woke...he would have no recollection of what occurred during the black out. People who have studied his life believe that he lived every day with the spectre of death hovering over him and that he stared at things and sought to capture them because he felt, it could be the last time he would ever see them. 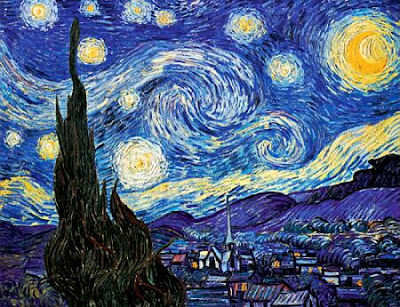 In the book I was reading, Van Gogh would never have actually stood under the stars as Alex Ruiz would suggest in this painting. Rather, Van Gogh was committed to an asylum by his brother and wasn't allowed to go out at night. Instead, he would have stared out from his window at the night sky and then waited until morning before he could go to his workshop and paint what he saw.

In any event, the original, and this one by Ruiz, possess a certain magic to them.

Wouldn't you agree?
Posted by Michael Offutt, Phantom Reader at 12:06 AM