I'm Mad At Writers Who Kill Off Characters 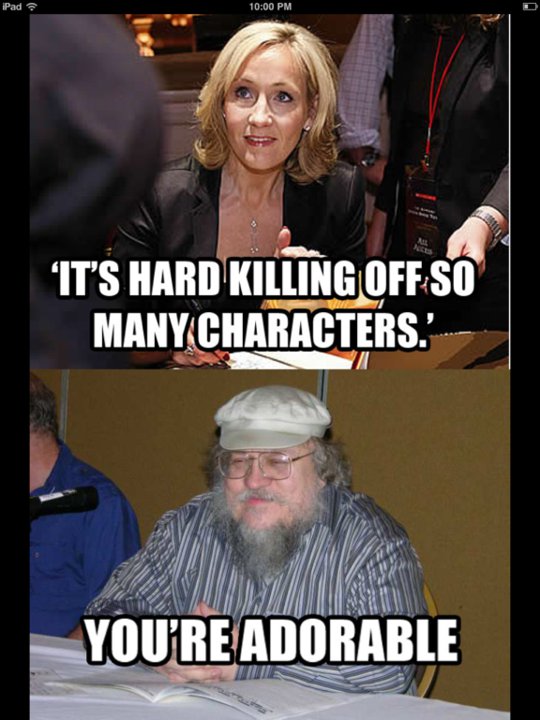 I want to know what magnificent source...what God of Literature said that it is okay to kill off beloved characters.  Tell me this person's name because they're full of crap and I want them to know they are full of crap.  My post yesterday about Vincent Nigel-Murray being killed off in BONES I think is at the root of my recent feelings regarding this topic.  I LIKED that character and him being thrown down the tubes so that the bad guy that Booth has to face off against is even more evil is just plain stupid. People can argue, "Oh killing off a character makes it more realistic and is better because it shows the writer isn't willing to compromise to keep someone alive."
Oh yeah? How is it better?  Bones lost a viewer.  I'm not going to watch the seventh season. How's them apples?  Have I done this before?

DEEP SPACE NINE--STAR TREK.  The writers killed off Jadzia Dax and I was furious. FURIOUS. I stopped watching.  Rogue Mutt asked me in my Star Trek compilation why Deep Space Nine got no love.  The reason...the whole series got tainted in my eyes despite all the great stuff they did when they killed off Jadzia.

In HOUSE...the writers killed off Cutthroat Bitch.  Yeah that really was her name (done by House of course).  But my point is that she LOVED Wilson. She was a brilliant doctor. And they frickin' killed her off and I cried and the series hasn't been the same since.  I love Thirteen which is why I keep coming back to watch House but she's sick so the writers have probably got her death tacked up on a scorecard somewhere. Good thing that it's in season seven cause if I quit watching once they kill her off, then the series is over anyway.

I didn't like it when Robb Stark died in A Storm of Swords.  I think George R.R. Martin went way to frickin' far with that. And you know what? His first three books may have been masterpieces, but A Feast For Crows and A Dance With Dragons have been crap.  Some of this is (I think) because Robb Stark IS DEAD!  He wrote himself into that corner because with Robb alive, the Lannisters would still have someone to fight against and he wouldn't have had to go into the whole Greyjoy thing.

Now I admit, there are times when death is necessary.  Charlotte in Charlotte's Web needed to die because her species of spider dies every year. That's just nature.  Obi-Wan Kenobi needed to die so that he could lead Luke to Yoda and be with him in the cockpit to destroy the Death Star.  Dumbledore needed to die because J.K. Rowling wrote herself into a corner by making Dumbledore more powerful than Voldemort. With him around, NOTHING COULD HAPPEN.  But you writers out there who are rubbing your hands together saying, "I'm going to kill off this character because it will tug at the heartstrings of all my readers" followed by an evil cackle--THAT IS NOT A REASON TO KILL SOMEONE OFF.  Yes, you will get this reaction and then I WILL HATE YOU FOR IT.  You will lose a reader because I will get mad.  Think very carefully about who you axe in your books because I am not alone.  Make sure the death is necessary please.

Meaningless death is meaningless.  There is a reason I read fiction.  In everyday life, people for no reason at all end up dead over something as stupid as a fish bone in the throat.  When I read, I don't want real life. 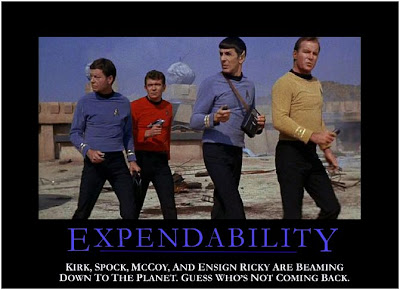