The Art Of Good Storytelling 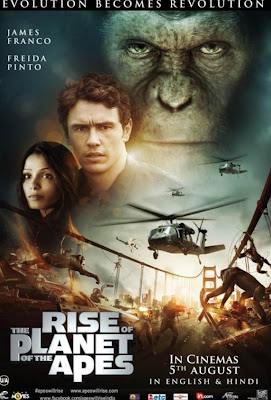 Alert: There are some spoilers ahead for the movie Rise of the Planet of the Apes.

This weekend I saw Rise of the Planet of the Apes and I loved it. When there have been so many of these movies done in the last fifty years including a terrible reboot starring Marky Mark...why did I love this movie so much?  What set it apart?  Well the storytelling is awesome.

Hard science-fiction can be challenging to pull off well.  This is where all the science is accounted for, where everything is possible, only you just take it a step further which is what breaks the boundaries of fact and throws in the fiction.  I knew this going into the movie because sci-fi reviewers had given this movie great props for pulling off the hard science-fiction aspects of the story. That and they set up the sequels perfectly.

This is what the writers of Rise of the Planet of the Apes did. They gave us an exposition of ground-breaking work in the world of Alzheimer's disease and took it one step further.  They showed us how the human drive to find a solution to a terrible malady could in fact produce evolution, result in a new life form, and that we...not them...would be the ones responsible for our own destruction.  And it all came about with the best of intentions.  The end result was never supposed to happen.

There were several parts of this film that I just absolutely loved. From being mesmerized that Andy Serkis could stand in for the motion capture of Caesar (who does some astounding things) to the lessons about humanity that I learn in just watching this splendid film take shape.  Tom Felton a.k.a. Draco Malfoy seems stereotyped as an asshole on screen.  I hope he can break out of this role and soon because he shows great promise as an actor that can play other types of roles.  James Franco as the scientist who created the drug stood in very well as the tragic genius who turned to all that he knew in order to make life better for his father (played by John Lithgow) who was robbed of his life with each passing day to the onset of Alzheimer's disease.  The film is filled with powerful foreshadowing.

Go see this movie.  As a writer, even if you only write YA or some other genre, you can benefit to see how sci-fi done well can have a lasting impression on you for hours after you have exited the movie.  By the way, if you are worried that you will see apes killing humans, that doesn't happen except by absolute accident or to defend themselves. In the end, it is the humans that destroy each other because our lack of humility with regard to the power of genetic engineering is the source of our own cataclysm.
Posted by Michael Offutt, Phantom Reader at 1:10 AM