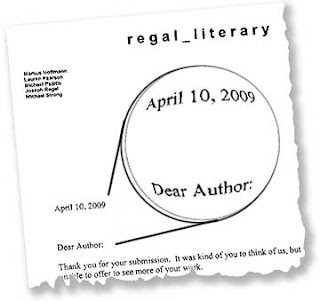 Russell Galen of the Literary Agency Scovil * Galen * Gosh is the only literary agent that I ever sent a query to that had this on his bio:


I’m the only agent I know of, and maybe the only one in the history of the world, who actually grew up wanting to be a literary agent... I loved writing but was not myself a writer: I was like the clumsy kid who loves the Yankees and wants to be a coach since he can never play center field. So even as early as the age of 14 I figured out that if you wanted to help writers live the good life, rather than write yourself, you could best do that as a literary agent.

You know what?  I think this (for the most part) is true.  And I've sent a lot of queries into agents and yes...I read EVERY word on their website before I put in a query.  From 95% of them, I got the impression that they could give two shits about actually wanting to be a literary agent.  They work there because they need a source of income and it's a stepping stone to their own writing careers.  Why?  Because platform comes easy for them as all they have to do is spout, "I'm an agent" and every writer out there goes and follows them so that before long, they have a thousand followers on their blog. Somewhere in there...they let you know what you would need to do to get representation from them.  Are they doing you a favor? To answer this question, let's take a look at who they are.  When I look, I see a regular old person just like me and you.  They are not entitled to better medicine than me, better food than me, better air than me, better water, or really anything.  All men are created equal, right?

Agents have two arms, two legs, a head, a brain, and an opinion that could be colored by race, creed, sex, education, sexual orientation, and religion.  They could have been raised as spoiled brats in an entitled household where everyone got an Ivy League education and where they speak amongst their friends in whispers at all the "brown" people who are now shopping at their favorite supermarket and cringe at manual labor, instead dreaming of biscotti cookies, live jazz music, and $6.00 cappucinos made at the local bistro. Or, just as likely, they could come from very humble backgrounds.  So what happens then, when you DON'T realize this, and take their word, their advice about writing, and swallow it as if it were the word of GOD.
I would hope that you would ask yourself a few questions about the advice you read.  For one, hmmm...exactly where is this wisdom coming from? Oh...well let's take a look at their bookshelf...I see something in common here as we thumb through all the titles they bought before landing a job.  The AHA moment!  Just to be clear...I define this as them telling you to write what "they" want to read.  There's a ton of baggage that comes with that ball and chain.  If I told you what I wanted to read you would never write in first person again--EVER.  I would send out rejection letters that say, "this doesn't have the 'voice' I'm looking for and wish you luck on your hunt for an agent."
What I want to address in this blog post to my writer friends is this phenomenon of "worship" that I see going on out there.  Don't deny that you follow some agent blogs so closely that if they said, "Yellow today is now blue" you would respond in a comment, "Oh thank you so much for pointing that out.  I never noticed before how yellow really is like blue."  Because some of you would do exactly this.

Do I think that literary agents have a place?  Yes, I do.  They should be selling books, they should let writers know how to write a successful query letter, what ingredients are needed in a synopsis, and what their submission guidelines are.  And...they should be OBJECTIVE--knowledgeable enough with what is being bought that they can recognize if something is MARKETABLE.  What should they blog about?  They should blog about agenting, representation, the business,...PERIOD.  If they don't have something to say about agenting, then they have no business saying it in their blog.  Do they do this? A lot of them do not.  And I'm going to say that the reason is because they are building a platform for some other purpose.

I disagree with all of this "writer" advice that they have when they are in fact "salesmen".  You do know what a salesman looks like, right?  Walk into SEARS.  Walk into BEST BUY...you will see salesmen working there.  They are there to help you make an INFORMED decision.  But never do they sit down and tell you HOW TO BUILD A COMPUTER or HOW TO BUILD YOUR OWN TELEVISION FROM SCRAP PARTS.  Yet, all you writers out there following their blogs are doing exactly this.  And 90% of those agents out there don't want to be agents.  They want to be rich.  They want to be the one in the limelight.  Oh let's look at a few agents that turned writers shall we?  Nathan Bransford and the Rejectionist are two that I can name.  And Nathan's blog stopped being useful about a year ago because he has no ability to help you because he's an author now.  You may want to read that again--he can't help you.  He needs to focus on his own career now.  He just needs to sell books so that he can quit his day job.  Do I fault him for this? Not one bit, but it's the way the world works.  The only benefit I can even see in following him now is 1) You want to buy his book and 2) You want others that are brain-slaved to reading his blog every day to see you hob-knobbing as if you are some big wheel and pick-up followers that way for your own platform.
Agent blogs aren't that helpful (but they sure do a helluva job as a smoke screen because on the surface, they look like pure gold).  However, as soon as they digress from the business of publishing, they have strayed into a territory I like to call crap.  They are full of conflicting advice.  Why do I use the word conflicting? Because GUESS WHAT...writing is subjective and what's good for Suzie Townsend is not going to work for Robert Gotlieb.  It just isn't.  You may defend by saying, "I build a rapport with an agent and she'll represent me."  I answer..."Okay...but that has nothing to do with writing and that's what you signed-on for right?  You became an author for a reason...to write...not to rub noses with the publishing elite so that they'll publish your grocery list."  Because that's what happens when you have friends in high places like that.  Yes, friends could publish your grocery list.  Will it be a bestseller? Only if your friend is Oprah.  So again, my point is, stop worshiping their writer advice.  Either that, or decide you're a socialite and that social networking is your thing.  Suck up, get your nose in there, and things will happen simply because you kiss the right rear end enough. It's not what you know...it's who you know.  that saying has been around for a long time.
I think that the truth is that anyone can get published.  If Stephanie Meyer can get away with a sentence like:

"The green leaves in the trees blew in the wind, greenly."

Then you too can get published.  You just need to find the right person with whom your work resonates.
So who can help you fulfill your dreams?  Who is Mike toting that you would be better off following and creating a relationship with if it isn't the likes of Rachael Gardner, Nathan Bransford, and others with followings of several thousand people?  ANSWER:  US.  YOUR FELLOW WRITERS.  People like Rogue Mutt, Steph Schmidt, Mooderino, CherylAnne Ham, Cindy Borgne, Danette and on and on and on.  Why?  Because we are EMOTIONALLY AVAILABLE.  If you ask, "hey, I'm having trouble with something, can you take a look at it?" We would probably say, "sure".  If your book comes out and you'd like help marketing it, I bet there are a ton of us (having gotten to know you) that would help you market your book.  Reviews on Goodreads, on Amazon, helping with blog tours, and sharing information with you on what is SELLING BOOKS--what is working from personal experience.
If you asked Nathan Bransford to put a widget for your book on his blog, you'd get a big fat NO unless you're someone that hangs out with him in pictures in San Francisco and has his phone number on speed dial.
But really, I think that worshiping every word that the agents drop from their pen is ridiculous.  Personal rejections are also ridiculous because in that, they are just going to tell you what didn't work for them, why they are saying no, and that they won't consider it anyway if you revise it.  So if you aren't going to consider the work anyway...why the hell even tell someone what they could fix?
It makes no logical sense, yet I see writers out there who have become my friends who get these kinds of personal rejections and they are left wondering what they could do to fix in order to be successful.  Let me put this into perspective...this would be like me telling you what you needed to fix in order to appeal to Barack Obama.  I don't even know anything about Barack Obama...yet because I have some title, you are ready to spend months rewriting your manuscript.

/end rant
Posted by Michael Offutt, Phantom Reader at 1:17 AM