Review of A Dead God's Wrath :)

A Dead God's Wrath was a delightful little gem I purchased from the Amazon Kindle store and read on my iPad in one hour.  It is by author Rusty Webb and you can find him at his blog The Blutonian Death Egg.

Here's the blurb from the jacket: 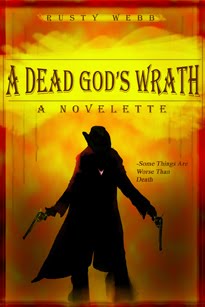 In 1895, deep in the Southeastern U.S., a sleepy little town is home to one of the most violent criminal families in the country. When Thomas O’Brien witnesses the brutal murder of his best friend and the kidnapping of his beloved Mary at the hands of the O’Malley brothers he thinks things can’t possibly get any worse.

But when a mysterious stranger shows up to help, Thomas begins to suspect this man is more than he seems. This stranger pledges to help bring Mary safely back from the O’Malley brothers, no matter the cost.

Tom’s real nightmare is about to begin.

Okay, so you might ask, what made this read so special?

1) It's incredibly well written.  Here's a sample of the prose:  A glint of steel flashed as Charles pulled a large machete from a scabbard hidden inside his coat.  He struck hard and sliced through burned flesh all the way down to Peter's bone--nearly removing the man's arm.  I don't know about you...but that's damned good writing. It's riveting. It's not choked with unnecessary adverbs.  It flows well.  I loved it.

2) Rusty gets big kudos for originality. As a sci-fi novelette, the setting is a western with glimpses of some other world in gadgets, hints, mythology.  Rusty knows how to keep you from knowing everything and you are continually guessing at what is going on.

3) Pacing. It's dead on perfect.  The novella starts with "Thomas O'Brien rode his horse as hard as he dared, and narrowly avoided disaster when his pull cart bounced and nearly tipped during his race into town."  That sense of chaos...that sense of angst you get from this opening line--it stays with you during the entire read.

4) Voice.  Rusty captures the feel of the old west in his narrator. He uses first and last names.  This is how he describes Mary:  "And his precious mary--dainty, feminine, Mary--still a few good meals away from a hundred pounds, she lashed out like a wild bear."  Wow...I mean this puts you into that period.  Who describes someone as being a few good meals away from a hundred pounds?  I'd be tempted to say, "She weighed 95-pounds." which would be kind of boring, right?  But I don't have the voice of a western in me--Rusty does.  I can tell that he's read quite a few.

I give this five stars.  If I were to ask Rusty what is more difficult to write, a novella or a full-blown novel, I wonder what he would say.  I would struggle to tell an interesting story in so few words. But Rusty knows how to do it and knows how to pull it off.

This book is .99 cents on Amazon Kindle and is worth every penny.

Thank you Rusty for the wonderful story :).
Posted by Michael Offutt, Phantom Reader at 1:08 AM