Truth has no agenda 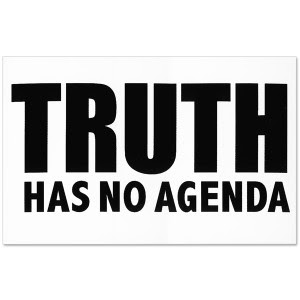 I saw a movie about six months ago called The Invention of Lying, and although it was funny, I kinda wished that I lived in that world. For those of you that haven't seen it, the movie is about an Earth where lying has never been invented. People just tell the truth all the time.  In answer to questions like, "How are you?" The main character gets responses like, "I'm terrible and have come up with a plan to commit suicide tonight in my apartment if I have the guts to do it. I'm a terrible coward."  The response being, "Oh well best of luck then."

I just think people lie way too much. They lie to avoid embarrassment, they lie to avoid punishment, and they lie to prevent hurt feelings.  Sure, I know the reasons of why people lie. I just wish it wasn't that way, and honestly I think the truth makes the world a better place.

Recently, a friend told me a story. She is a Hispanic American whose first husband was a black man. As a result, her beautiful daughter had natural dark skin. She took her daughter to a daycare here in Utah and after work, went to pick her up. The lady at the daycare said, "Please don't bring back your child. I cannot care for your child. You need to find another daycare."

The lady responded, "No. She's black. I will not care for a black child."

Instead of getting angry, my friend responded as I would have responded.  "Thank you. Thank you for admitting that you're a racist bigot. I will find another daycare for my child. I honestly am thanking you because had you not said something, you could have harmed my child. I'm glad it never came to that."

And she promptly went in search of another daycare asking questions like "Are you okay with the fact that my daughter has very dark skin?"

As a man with mixed ancestry myself, I understand perfectly how even though it is 2011, when you don't look a certain way or act a certain way you will be discriminated against. I appreciate truth.

More examples from life. Wouldn't it be better if people were honest in their interactions with others?

Take Sandusky of the Penn State scandal. If he had the guts, he should have just come out thirty years ago and said, "I like to screw boys. I'm a pedophile." Then maybe he could have moved to Thailand or some other place that doesn't prosecute pedophilia and not be in the trouble that he is in. At least boys would have been protected, and he could have claimed to be a part of the human race by outing himself as a monster. As is, he's more slug than human.

People who don't believe in God or the teachings of a religion yet remain within the ranks of a religion giving tithe simply because they don't want to lose friends or shatter the lives of their families. This is living a lie. And it gives strength to a religion (and their agenda) because you support them with your cash. I manage to eek out an okay existence by being an "out" atheist. I have no family and kids and play a lot of video games and read books. I wish it were different, but at least I don't lie. Lying is for cowards.

How about going up for a promotion at work? Here's the situation. You have more experience than the other guy. You have more education. Yet the other guy gets the job. Wouldn't it be nice if the boss just said, "Hey, the other guy is more attractive and even though he's married, I'm hoping I can screw him once or twice despite the fact that he's married." Don't laugh...I've actually seen this happen. I no longer work there...but yeah...I saw exactly that. Being the guy that didn't get the job, I would have liked to have had the truth. I could have quit sooner.

Another example: a man I once knew gives his wife a doughnut every day after working midnight's. He knows that the wife has been trying to lose weight but says, "She loves the fresh doughnuts. It's a way I show that I care." The truth is more sinister: "I'm an insecure man and think my wife will leave me for another man if I don't fatten her up and make her feel ugly." I've seen this in action...it really did happen. I called the guy on his bullshit, and he 'fessed up to it.

A person says, "I will read your book." The truth is they have no intention of doing this. Just be honest. "I don't read and won't buy a copy of your book." I'd be fine with that and would say, "Thank you. I never expected your support anyway. It's not like we exchange Christmas cards."

A person gets to be friends with you so that they can befriend a friend of yours that they want to have sex with.  Just be honest, "I find this person attractive and want to warm up to you so that the other person will like me and we can screw. But I really have no intention of being your friend and would prefer if you dropped off the face of the earth once I get what I want."

I like truth. I rarely get upset at truth. If someone finds me uninteresting, they should just feel free to say it. "Mike, I find you uninteresting and frankly, don't ever want to interact with you again." My response, "Thank you for being honest. We shall never interact again. Bye."

Occupy Wall Street is a movement that I've watched with fascination. It's people banding together over simple truths and they are not afraid to let people know that they are upset.  The truth is that some people are living lives that are so much better than others and work far less for it. The truth is that 1% of the people control 99% of the assets. (Mr. Jay Noel corrected me and I apologize for this gross mistype. When I originally wrote this post it was around midnight, and I just wanted to get it out there. 99% just stuck in my mind--with no editor to catch my glaring error, it just got posted.)  Here is Jay Noel's words (and he is correct) from comment below (sorry everyone I knew this but it just didn't come out that way although what I "knew" came closer to 50% from the news):

"Other than your gross miscalculation of the 1% (1% actually control anywhere between 38% - 42% of the nation's assets depending on which study you look at. The IRS confirms this. Still lopsided, but a FAR cry from the 99% you stated)"

Now onto the rest of my post ==> And the truth is that many in that 1% could give a crap about anyone in the 99%. I bet if poor people died by the millions or got gassed, they wouldn't shed a tear. They'd say, "At least I don't have to support deadbeats anymore." They should just tell the truth. Let people see them for the assholes that they are.

Funniest truth I heard all week came from a Catholic. I respect what he said. "Go through life and sin a lot. Otherwise, Jesus died for nothing." I was stunned given his beliefs but laughed my ass off.

Most people are so fake. I'm kinda sick of it. Do the world a favor. Next time you find yourself wanting to tell a lie...just stop. Come out with the brutal honest truth. Let people see you for who you are. Be true to thyself.
Posted by Michael Offutt, Phantom Reader at 12:14 AM

Email ThisBlogThis!Share to TwitterShare to FacebookShare to Pinterest
Labels: Truth has no agenda