I'm a Pied Piper and the Easily Flushed Blog Hop

L.G. Smith over at Bards and Prophets bequeathed me with the Pied Piper Blog Award created by the Geek Twins (I guess Alex infected her a few days ago)...anywho...thank you L.G.! 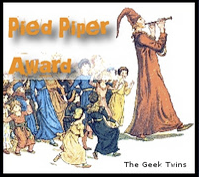 The rules are simple:

1) List three of your favorite followers and why.
2) Pass the award onto three bloggers that you feel deserve their followers the most.

I'm going to break the rules a little and pick out some followers that don't get a lot of comment love (and I hope that changes):

1) Benoit Lelievre has a cerebral book blog called Dead End Follies where he analyzes books that he reads and talks about serious film. I hope that you go and visit and partake of some of his wisdom because the man is smart smart smart.

2) Mr. Briane Pagel who keeps several blogs. The one I visit the most is Thinking the Lions. It's mostly about his journey through life as a middle-aged lawyer who has one set of grown kids and another set of babies who just happen to be autistic and run like perpetual motion machines.

3) Ms. Marjorie who sometimes writes on her blog Upwards Over The Mountain. She says in her latest post that she is considering another blog. What I really like about Marjorie is how worldly she is. She's incredibly young, speaks multiple languages, has been to China and Taiwan, lives in New York City...I mean...sheesh...just incredible. So whenever she chooses to breeze on by I think it's wonderful. I feel like Carrie Bradshaw from Sex and the City has recognized me for just a moment.

Okay, so now who do I pass this award onto?

1) Patrick Dilloway who blogs at Grumpy Bulldog's blog. Patrick's personality is similar to my own so I think
it's natural that we are blogging buddies.  He's not afraid to say what he thinks, and I appreciate that honesty.

2) Brooke R. Busse because I promised Brooke that she would from now on be the recipient of blog awards that got passed onto me. Aside from that though, she's just a really smart writing person/woman/teenager. Brooke's blog is at Paper Mountain. Get to know her now before she is famous. Famous people don't ever look at you anymore.

3) Charity Bradford because Charity is going to win the Hugo, and I want to say that I predicted it here first. Find this awesome future award winning author at her blog Charity's Writing Journey and ride her coattails of success. 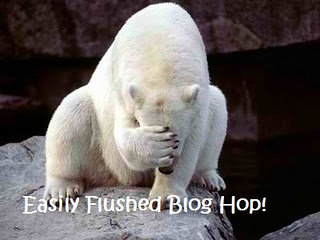 I've joined the Easily Flushed Blog Hop that is the brainchild of Cassie Mae. It takes place all day today. The prize is a $10 Amazon Gift Card. All you have to do is comment and post this polar bear on your blog and tell people/tweet about the contest. Please follow the link and go win a gift card. :))

I went to a house to fix a computer internet issue. When I got there, I discovered that the people used wireless. I asked them to take me to the router so I could reset it. Well the router was in the basement behind some sex toys. I said, "Hmmm, I can't quite reach it. Could you get it for me." It was very awkward.

Have a great Tuesday.
Posted by Michael Offutt, Phantom Reader at 12:32 AM