Because Prometheus is just around the corner (days are counting down) and I need to talk about something that begins with an "X", I'm choosing to write about the Alien xenomorph. 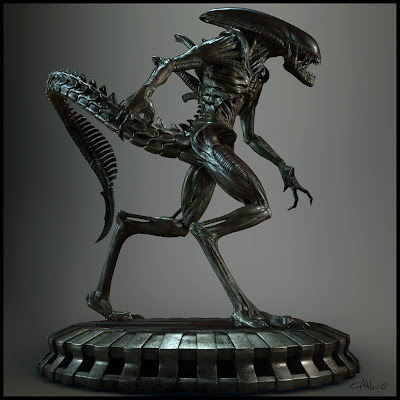 Most people who have seen the movie Alien find the xenomorph itself pretty disturbing. There is also something totally and undeniably horrifying about the derelict spacecraft in which the eggs are found. The details shown in the sketches of the book "Giger's Alien" imply that the spacecraft (that we see in the Prometheus trailer) has a design and function related to something unimaginably malignant by any human standard of the definition of "malignancy". Perhaps "malignancy" is not even the right word here. The derelict goes beyond that. It encompasses an entire system of systematic obliteration of life which goes beyond any human definition of evil.

I think it's a good thing that this object (and creature) exists only in our fantasies. I think it would be disturbing to share the universe with a species as terrible and horrific as the one envisioned by H.R. Giger (the creator of the Xenomorph creature).

As a writer of science-fiction, I've taken many cues from Mr. Giger in my own work. In "Slipstream" I have a god-like being who went insane when his personality split down the middle. The evil side of this god-like being wanted nothing to do with the good, law-abiding side. So much so, that it cut itself in half and replaced the human aspect of itself with machine. Horrific as that may sound, both sides of this avatar survive independently of one another. To know more, well, I hope you'll invest in my book.

Generally speaking, however, it's this sort of characteristic that's a trait of Giger's biomechanical style: I don't think there are many (intelligent) people who would like to see Giger's worlds being realized, because if such was the case, they would be in a heck of a lot of trouble. And the same goes for the dystopian world of Avalon in my book. It's been described as a dark fantasy filled with exciting and original monsters, if not a bit horrific.

But I bow to the master that is H.R. Giger. I wonder how this man (H.R. Giger) even sleeps at night, with the thoughts that must occupy his head. 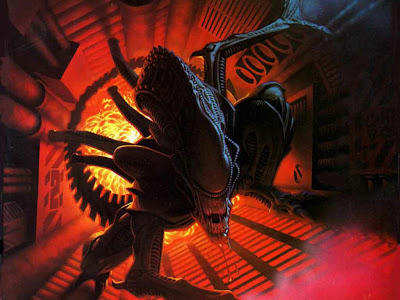