The Oppenheimer Connection in SLIPSTREAM 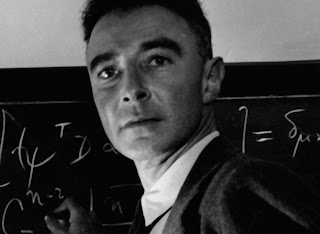 SPOILER ALERT==> I'M CHATTING ABOUT MY BOOK SO GO AWAY IF YOU DON'T WANT TO FIND OUT WHAT PART OF THE STORY IS ABOUT:

I think that Robert Oppenheimer is a tragic figure. An American theoretical physicist, he along with Enrico Fermi, created the first atomic bomb as part of the Manhattan Project. Oppenheimer recalled after the detonation of the first atomic bomb (called Trinity) a verse from the Hindu holy book, the Bhagavad Gita. "If the radiance of a thousand suns were to burst at once into the sky, that would be like the splendor of the mighty one..." Years later, he said he also thought of a second verse, "I am become Death, the destroyer of worlds."

Convinced that the H-bomb was a genocidal device that would cause excessive destruction, Oppenheimer believed an international agency should regulate nuclear weapons. He argued that the United States could secure its defense with a stockpile of atomic arms. However, at the height of the Cold War, defense hawks and anti-Communists saw Oppenheimer’s view as unpatriotic. Edward Teller and Lewis Strauss, two advocates for the hydrogen bomb, contributed to Oppenheimer’s humiliation in hearings that stripped him of his security clearance forever.

I've always thought that America behaved terribly toward one of our greatest minds. Fear of course was behind it, and Americans are some of the most afraid people in the world. I'm not saying that there isn't good reason to be afraid. But fear drives public policy, decision-making, and belief.

When I set out to write my book, I used the work that Robert Oppenheimer did and the Trinity bomb as a catalyst for the destruction of a parallel world in a mirror universe.

I posed this question: what would happen if there were two adjacent universes? We live in one. And people just like us live in the other. To keep these two identical universes apart, are two towers. One on Earth and one on the mirror world which I call Avalon.  These structures are big...really big. As tall as mountains. The one on Avalon was located in the desert of White Sands, New Mexico. So, what are these towers?
Well I have an answer for that. These towers are just containers to keep a pair of boxes safe. The boxes are part of this whole idea that I had of a designer universe. In other words, the boxes are the most incredible super computer that you could possibly imagine and probably even a little beyond that. They have an unlimited unknown power supply self-contained within the towers. They run a computer program that defines all the laws of physics in mathematical terms for every thing in the universe.

You might ask...who created the towers? Who created the boxes? I name that being as simply "The Creator" and never go further into that. But the Creator would be a pretty amazing engineer.

So what is the Oppenheimer Connection in SLIPSTREAM? An atomic bomb produces an electro magnetic pulse. This thing disrupts electronics. The towers that house the amazing boxes that define how the universe works would have been immune to this. What I pose in my story (once I set up all these ideas) is that when Trinity was detonated on Earth, the effects of the EMP crossed the boundaries between universes inside the walls of the tower on the parallel world. It disrupted the computer program running in the box on the far side for a millionth of a second, and this was very bad.  It laid waste to an entire world, and the tower on that mirror planet that had stood for billions of years exploded.

This event set into motion everything that happens in SLIPSTREAM and in its sequels that I've plotted out, but have yet to write.
Posted by Michael Offutt, Phantom Reader at 8:36 AM