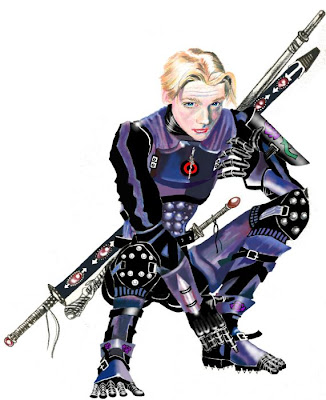 SPOILERS: I'm chatting about my book. You have been warned.

At left is a drawing I worked on and never finished. Hence the "missing background". He's cartoony. I drew it probably ten years ago, I think (maybe longer than that). I honestly can't remember. Don't be cruel people!

Anyway, consider this my "concept art". I have other concept art sketches...some in color...some in black and white...that I've done over the years to help me visualize my characters.

This is what Kolin could look like (it's difficult to find the right picture in my mind). He's the guy that Jordan (my protagonist in SLIPSTREAM) falls in love with (yes there are gay people in my book...run away now). They do gay things together too...not just picking out window treatments.

Kolin kills people for money. He's really good at it too because he's had lots of practice. The suit he's wearing is called a killsuit. It's one of the gadgets that my friend Donna Hole alluded to that I use in my book when she reviewed it. So what is a killsuit? Well it's something that you wear when you intend to kill people. Kolin's a professional assassin. He uses guns, swords, knives...he's really good at murdering folks.

It's a very special piece of equipment that has many properties mostly associated with the metal it's made from.

Anyway, I use these suits extensively in the first book, SLIPSTREAM. Each suit has a color that is matched to the person and it alternates with the color black.
Posted by Michael Offutt, Phantom Reader at 12:30 AM