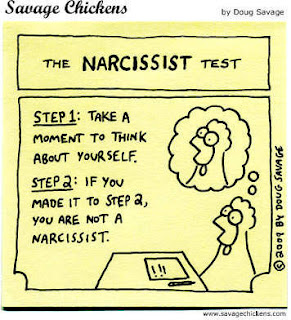 Does Twitter breed narcissism? Do your eyes light up when you see a new blog comment, receive a new email, a new tweet, or a Facebook message? Some writers refer to this as validation. I say that's a euphemism for narcissistic personality disorder or NPD.

Think about why you follow people on Twitter. You want to know all about them, their lives, their thoughts...you want to know if they're going to lunch in a bookstore or if they'll post a photo of something you have never seen and get that intimate experience that only 900,000 other people can share at the same time. But it was meant for you lovelies...it was meant for you.

After categorizing 3,000 messages from 350 Twitter users in a recent study, professors at Rutgers University published a study that indicated the majority of updates on twitter are self-centered.  From the press release:


80 percent of regular users are "meformers," people who use the platform to post updates on their everyday activities, social lives, feelings, thoughts, and emotions. The remaining 20 percent--"informers"--share information, have larger social networks, and are more interactive with their followers.

Here's an article that goes more in-depth on the prevalence of Narcissistic Personality Disorder in the social media scene.


If you go to a big city tweetup or social media conference, you're almost guaranteed to meet a clique of NPD people and their minions engaged in an ego-stroking circle jerk.... The successful NPD person creates an intricate matrix of positive feedback in the form of fans, friends, followers, and partners who fulfill their endless needs. When the sources of these ego rewards (comments, accolades, retweets, speaking gigs) become unavailable or fail, the narcissist will experience intense feelings of emptiness.

Don't get me wrong. I'm not advocating against using Twitter. On the contrary, I'm on Twitter and because of it, I knew breaking news the moment it happened. 1) Adam Lambert got kicked out of Lady Gaga's birthday party for trying to shove her face into her cake--I mean...damn!! 2) Bill Shatner is in New Zealand but failed to provide me a tweet of when he went to the bathroom 3) A famous YA author loves Tumblr 4) and another famous author compares herself to the powder puff girls and...wait for it...proclaims her frustrations on twitter that her bank put a limit on her debit card on how much she could spend in a day despite the fact that she has the money to cover it. 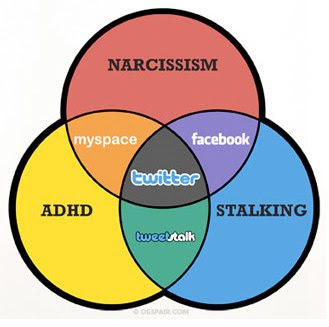 I'm so inspired...Do you think that I could put the above design on a t-shirt? Everyone I know would have to have one. Of course, I'd expect you to buy it from me and wear it for me and tell me how much you love it and tweet me and message me and comment me...

Oh dear...
Posted by Michael Offutt, Phantom Reader at 7:43 AM