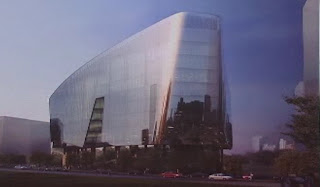 This is a picture of the new Lucasfilm building that's being erected in Singapore. To fans of the Star Wars franchise, ayep, it is intentionally designed to look like a Jawa Sandcrawler which is just plain awesome.

While en route to Starbase 112, the Enterprise detects strange electromagnetic readings emanating from a barren M-Class planet. Upon further investigation, it is discovered that the source of energy is in fact a box containing Tasha Yar (India Summer), the long dead former Chief of Security of the ship, in cryosleep. Is she the real Tasha Yar? Is she a clone? Or is she something completely different?

I guess that Giles Aston is not getting out of his Starfleet uniform for the film. The man's strictly playing Capt. Picard as straight as can be (which would actually be quite in character).

Second, adult film maker Revolution X has clearly put a lot of effort and money into its re-creation of the Next Gen ship, costumes and makeup.

With regard to the new Superman movie, Diane Lane (pictured at below left) was locked up by Zack Snyder for three hours while she read the script. Here's a quote:


"I read the script under lock and key. ... I was locked in a room with the script and was only allowed three hours with it. I nailed it into my memory. I'm really excited. I'm really not allowed to talk much about it, I think, but it does cover the entire range of years, from infancy on."

Can you imagine doing that with an agent? That'd be hilarious. *Pushes agent in room with latte and manuscript and locks door* Well hilarious for anyone that read about it...not so much for the poor agent.

And to show you just how far the Twilight saga reaches--if you've been living in a box this is a set of vampire books that gets made fun of in just about every way from digs on the show "Supernatural" to internet memes and .gifs to finally, the Jersey Shore crew. Well now the NHS  in the UK has stepped in on the bandwagon and produced a dental health commercial for...well...vampires. But the message is clear:

If a vampire has any hopes of getting it on, he'd better keep those fangs of his clean. Which is the National Health Service's way of letting guys  know that if they want to get it on, they'd better do the same.
Posted by Michael Offutt, Phantom Reader at 7:40 AM