Iron Man 2 Faceplate Contest, The iPhone 4 Is My New Lovely, & Marcel the Shell

Jo Schaffer over at her blog entitled "Shoveling In A Jo Storm" has the most amazing contest that is appealing to every nerd fiber in my body. Here's the short of it: her husband works in the movie industry and he's branching out from being one of those that works in the backlot of the film to actually trying to put together his own independent film. This is an admirable goal in my opinion, but to do so, he needs money. So he's looking for more exposure to his Kickstarter project which I've linked here.

Now, of course, by both blogging and tweeting this, I get an entry to try and win the super cool face plate of the Iron Man face plate made by Clark (the lady's husband) for the Iron Man 2 movie. So far, I think I've been really lucky with blog contests. I love commenting on them and I won a $25 gift certificate from Ciara Knight's blog and I won a cool hardcover book called Godlike Machines from Jay at Bookrastination.  I think Jay has taken a bit of a hiatus from blogging but I won the book prior to that.

If you are nerdy like me, I think you should hop over to Jo Schaffer's blog and get an entry into this contest. I mean the Iron Man 2 face mask is a huge collector's item. If I win it, I'm getting it framed.

I HAS AN iPHONE 4 PRECIOUSSS... 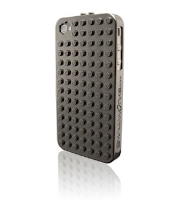 I do...I do... and you know what makes it even cooler...this frickin case.  I mean there are a lot of cases out there...ones that make your phone look like a cassette tape or an old style rockin' prehistoric phone etc.  But this lets you put Legos on it...yes my lovely friends...I said Legos.

It's only $20.00 on Amazon and according to Gizmodo, works great with any Lego bricks :))) Just think of the possibilities...if you want you could put a flower on your case.  Or alternately Darth Vader (see picture). Course you could do both and be super versatile.

Now when I got my new iPhone I had to pick and choose between AT&T and Verizon. This was harder than it appeared. Eventually, I decided to stay with AT&T because basically they had more features despite the fact that I seem to get a lot of dropped calls. I still have no idea if I chose correctly or not.  But here were the selling points:
1) If you go with AT&T you can talk on the phone and surf on the web at the same time. I've done this successfully a few times before in important situations at work so not being able to do that was mostly sucksauce, ya know?
2) I get rollover minutes with AT&T which means my bill could go down $20.00 a month from what it is now and I still keep my 9,000 rollover minutes which is just insane.  Verizon has no rollover minutes.
3) I was grandfathered into the unlimited data plan with AT&T. They don't offer this anymore and with Verizon, all I'd get would be 2GB a month and then they'd start charging. Ugh. So yeah...considerations (seeing as I'm not rich I need to make wise choices to have the stuff I want).
I'm leaving you with this video I found on YouTube. If you watch one video, please watch this. It is hilarious and reminds me of Steven Wright's comedy sketches from the early nineties. He was the comic that would deliver these one liners like "Why is the alphabet in that order? Is it because of the song?"
PLEASE TAKE THE TIME TO WATCH...I mean it. IT'S FUNNY, I pinky promise you'll not regret it.
Posted by Michael Offutt, Phantom Reader at 2:22 AM