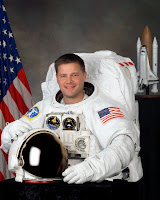 I follow this dude on twitter. His name is Douglas Wheelock and he's an astronaut presently aboard the international space station. Here he is in his spacesuit. Anyway, he published a bunch of nice pictures on twitter (astro_wheels) and my dad sent me an email letting me know about them. So, I figured I'd make my Monday post about pictures from space. Interesting tidbit==> I guess that the International Space Station has only had internet access for about half a year now.  I used his comments as the captions on the photographs so you know a little about what you're looking at since the Earth looks way different from outer space.﻿

﻿
﻿
Other cool facts: They travel at a speed of 28,163 kilometers per hour in the International Space Station (around 8 kilometers per second). This means that they make one revolution of the Earth every 90 minutes and watch sunsets and sunrises every 45 minutes.  This is a fancy way of saying that fully half of the journey spent on the ISS is spent in darkness.

Also on another interesting note on March 28th, scientists observed the largest explosion in the universe.  Here's the link to the article.  In short, a huge star was witnessed being pulled apart by a black hole that resulted in an incredible light show visible billions of light years away.
﻿
﻿I guess this explosion was much larger than a gamma ray burst. I can't wait 'til Dr. Michio Kaku does a television special on this.
Posted by Michael Offutt, Phantom Reader at 1:37 AM

Email ThisBlogThis!Share to TwitterShare to FacebookShare to Pinterest
Labels: Astronomy