Marvel's Moon Knight was a weird but entertaining ride with a saggy middle. 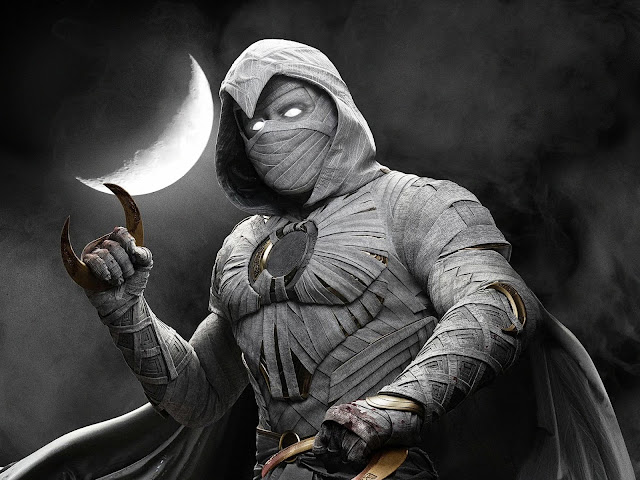 There are some spoilers in this post for Marvel's Moon Knight.

Moon Knight was weird. I knew next to nothing about this character, whether we are talking about Steven or Marc. But the unreliable narrator bit that we saw in three seasons of Marvel's Legion kinda got old. Oscar Isaac certainly showed range, switching between accents and personalities. So, I'll give him that. But overall, I think my favorite character in the show was the hippo goddess Taweret. She was so extra that it made all of the work that I put into watching this show pay off.

Speaking to Pat Dilloway (who I know courteously reads my blog when I choose to post), I agree with you, sir. All of this Egyptian stuff made me hunger for a Scarlet Knight series. I'm right there with you, and (as you know) I've read several of your books. I think your Scarlet Knight would have been more entertaining than Moon Knight (being completely honest here). I mean...I liked all of the Egyptian stuff, but they didn't stay immersed in that world. Instead, for two entire episodes, we were immersed in the aisles of an insane asylum that were being experienced by the character in the afterlife. He was forced to go and revisit traumatic memories from childhood in order to rebalance the scales. This was great character development. However, it isn't really what I watch a superhero show for, if you get my drift.

There were also times when I wondered which of the Avengers was monitoring the whole situation that was clearly going on, and at what point they'd decide that (maybe) it was time to step in. I mean...there were gods the size of kaiju literally fighting in the Egyptian desert outside Cairo. One even got slammed against the Great Pyramid of Giza. This is a strange problem that the MCU has now, and is just something I probably will have to let go/get over as the roster of characters grows bigger. I suppose an argument could be said that Dr. Strange (with his portals) is the only one that could have responded quick enough. But the omission of the big heroes seems glaring, especially when I watched HBO's Peacemaker and the entire Justice League shows up at the end (as they should) when all the crap hits the fan. That was a huge surprise to see Aquaman (Momoa) and others there.

When Layla embraces Taweret and gets an armored avatar, I was impressed with the look. She kinda looked like an avatar of Isis with those wings, so I think they missed an opportunity to make her look more hippo-like. But it was still great. I would look forward to a second season if I thought there was a chance for one, but Oscar Isaac is no longer contracted. So the likelihood of that happening is going to depend greatly on whether or not Oscar Isaac passionately wants to reprise the role and if Marvel is willing to open its purse strings to make it happen.

Anyone else care to weigh-in on their opinions of Moon Knight?

Posted by Michael Offutt, Phantom Reader at 9:18 AM