A Chorus of Dragons by Jenn Lyons is an epic fantasy story that I enjoy but leaves me continuously annoyed. 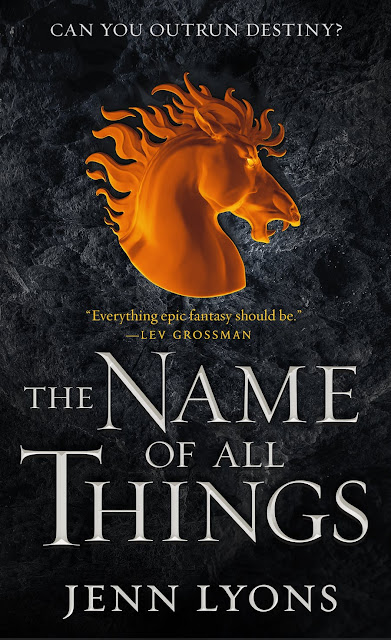 I'm currently reading Jenn Lyons A Chorus of Dragons. If this is an unfamiliar thing to you, it is an epic fantasy series about a long-lost royal whose fate is tied to the future of an empire. It consists of The Ruin of Kings, The Name of All Things (the book I'm currently "in progress", The Memory of Souls, The House of Always, and The Discord of Gods. These books are not your typical fantasy offering, which is kinda what drew me to them to begin with. I'm also not sure that the author's writing style actually works for me. However, that isn't to say that I'm not enjoying the tale. It's weird to describe my emotions after reading her pages. I like what I've read, but I think that her delivery leaves something to be desired.

The first thing that takes a lot of getting used to, and (in fact) is annoying is that she (Jenn Lyons, author) uses footnotes. I've never seen a fiction author do this, and there are little footnote triggers throughout the text that force you to stop what you are reading to examine the footnote. I actually hate this, and I'm wondering why this author decided to do this. It's definitely experimental, and I think to myself, "How did this even get published like this?" But then I realize that the story is actually quite good, and I also realize that genre fantasy (especially epic fantasy) is a safe space for experimenting wildly with things. That (in itself) is weird. Why does fantasy as a genre allow for experimentation other than publishers must know that the audience for these things is incredibly forgiving and/or the readers of this stuff lack common sense and won't be bothered by thousands of pages, much less footnotes? And, I've actually proven them right if this is what they think of us, because once I finished The Ruin of Kings, I liked it so much I bought the rest of the books in the series. It makes no logical sense. I disliked something a lot, and then I invested in it.

The second thing that is annoying about these footnotes is that they are told from the perspective of the person who is narrating the story. But here's the thing, the narrator changes every chapter. The way Jenn Lyons goes about telling her story is to have two people in a conversation. One person is talking to the other, and tells the story of the other person from their perspective. And then the other person continues their own story and some of the other person's from their own perspective. And usually, these two stories are not continuations of each other. They can be of the same person, only years apart. So you end up bouncing back and forth, kinda like...a prequel and the sequel and then the prequel and then the sequel over and over.

The way she arranged this in the first book was to have one of the narrators imprisoned, narrating his story before he was executed. The other narrator was his jailor, a creature of supernatural power with the ability to read his mind and able to access the memories of all the persons they had killed with a trail of dead bodies that went back centuries. So they knew things about the character, that the character was probably loathe to admit. And there was a kind of strange empathy that formed between jailor and prisoner due to the fact that the jailor had killed the parents of the prisoner, so they had unique insights into what kind of person the prisoner was to parents who loved him. It was all so very strange, and I'm honestly surprised that this author could pull something like this off (which is probably another reason it got published). Anyway, that prisoner/jailer exchange could not continue into book two. So, I foolishly reasoned that maybe the rest of the books would break from this cycle of two people telling a story and that we would lose the footnotes.

However, I was wrong. The second book is once again two people telling a story. This time, they are in a tavern. One has a book that is filled with extremely detailed narration of their adventures. And these two people are taking turns reading from this book to a third person who is asking questions about their journey. It doesn't at all work as well as the first book, and I kind of feel like the author pigeon-holed themselves into a format that worked for one book, but is now becoming a weight around their neck as they need to keep to this same kind of storytelling for book after book. I gotta say, it is a really unusual and unconventional choice in which to write. But it obviously worked for them, which is probably all that matters. My "practical" brain begs the question: why make this story so hard on yourself? You could have just told it in third person, chapter after chapter? The footnotes could all be related by some character. Why did you choose to do it this way? Sometimes, I think writers purposefully complicate things in their attempt to reinvent the wheel (or explore something new). It reminds me a little of Tahereh Mafi's use of strikethroughs in the Shatter Me series (only her strikethroughs were simple, and they used text in a way that I had never thought of doing before). But footnotes? Really? Ugh...yet here I am...reading these books by choice because they actually tell a good story.

Anyone else have an opinion regarding footnotes? Anyone else busy being "clever" and reinventing the writing wheel? I'd love to hear of your anecdotes and how successful or unsuccessful you were/are.